I knew I would have to wear an immobilizing brace post-surgery, but was not prepared for all the velcro. There is an armband around my upper arm to keep me from moving my shoulder, a cuff around my wrist, and an over-the-shoulder strap, all of which is attached to a wide band around my chest. All of these pieces are covered with a LOT of Velcro so they stick together. Last summer, I planned to finish a poncho I had been knitting, but didn't. Just as well, as today is the first day cool enough to wear such a thing, plus wool clings to velcro like a burr on a dog. Interestingly, I've discovered that superwash wool is relatively easy to peel off of the velcro.

The staples were removed this past week, and I asked if I could knit again. Sadly, the answer was NO because apparently I also had a bicep tenotomy during the surgery. Two more weeks of the brace, then two weeks after that I start physical therapy. Hopefully, somewhere along that timeline, someone will say it is okay to knit.

Another book I recently purchased is Annie MacHale's Three-Color Pickup for Inkle Weavers. This is advanced inkle weaving at its most challenging. One needs to be relative proficient at Baltic pickup before tackling this, so I requested a book from the library that should help with that. 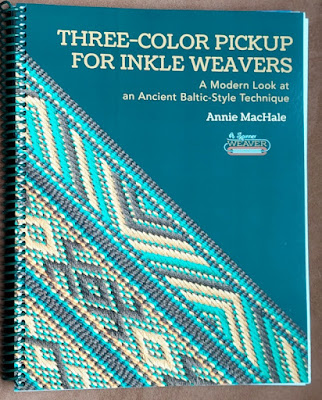 Before my surgery, I was feeling a bit bored with fiber: I was tired of spinning the red Tunis and frustrated with the inkle weaving and not able to do much else. Now I am getting antsy to get back at it, have lots of projects planned. Hopefully it won't be too long. Meanwhile, there are jigsaw puzzles to tackle. 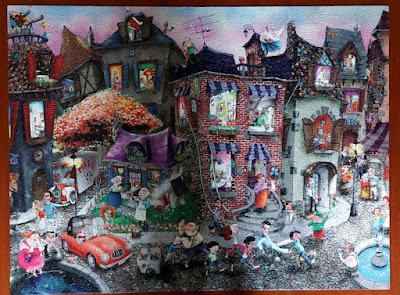 (One piece is missing. I purchased this puzzle used from the community center, so don't know if the piece was already missing or if I lost it.)
Posted by bittenbyknittin at 3:49 PM 2 comments:

I'm still recovering from the surgery, and will be for a while. My energy level is low; not sleeping well is not helping, either. I've been using a "lift chair" - a motorized recliner - as my primary residence, although sometimes I shift to the couch. Lying in an actual bed is not yet comfortable.

While twiddling my fiber thumbs, I ordered a book I mentioned before, Tommye Scanlin's Tapestry Design Basics and Beyond, purchased from the Woolery. (I'm a bit anti-Amazon right now). I also purchased the latest Little Looms magazine. One can dream, can't one? 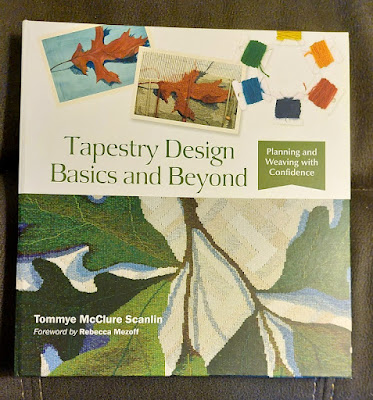 It's surprising all the things one can do with one hand, frustrating about all the things one can't. I did try to knit a bit on the Habitation throw since I am knitting continental, but after a couple of rows, gave up. Knitting activates micro movements in the shoulders, plus all the velcro on the immobilizer grabs at the wool. I've talked to enough people who have had shoulder surgery who regretted not giving themselves time to heal properly. I understand the urge to forge ahead, but don't want to make things worse instead of better.
Posted by bittenbyknittin at 7:06 PM 1 comment:

Email ThisBlogThis!Share to TwitterShare to FacebookShare to Pinterest
Labels: Books

Just a quick note to say that the shoulder replacement surgery went well. I'm home and sometimes feel almost normal. The dogs are at the kennel for a few more days, the cats take turns sleeping in my lap, my SO and daughter help with the stuff I can't do one-handed. So all is well. The aftermath of this surgery is more painful than hip replacement, so it will be a while before I can do any fibering, though.
Posted by bittenbyknittin at 4:36 PM No comments:

This past Saturday a dozen or so of us attended a workshop called Weaving Turned Krokbragd Sheep on an Inkle Loom, presented by Joan Sheridan via Zoom. One never knows how a remote workshop will work out, but this one was great. Joan had pre-recorded parts of it on video, with closeup views of the work at hand, so we were able to see (and repeatedly view) what to do. She also provided (at an extra cost) kits with the necessary yarn and doodads needed to not only weave sheep but to make a keychain.

The warping is a bit different with Krokbradg as one needs three heddles to make this work out. While the warping took most of the morning, the weaving was the most difficult part for me, as the heddles kept hanging up. I may play around with some alternative ways of handling them so they don't bunch up so much. 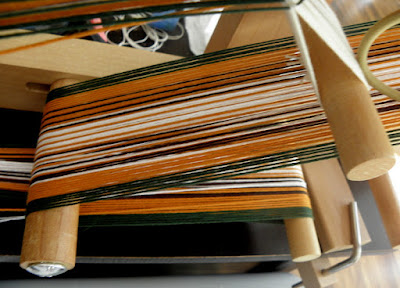 But weave we did. It's a fun project with fun results. But do you notice something odd in the photo below? 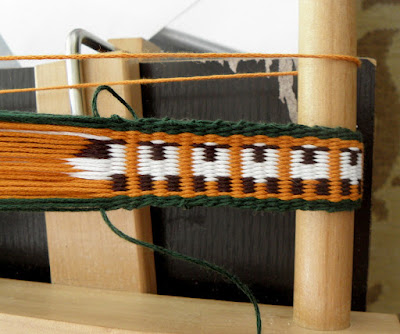 After I had woven a good eighteen or so sheep, I noticed an extra warp thread. What is so confusing is I had repeatedly counted warp threads, from the initial warping to the heddling to the weaving. And still one escaped my notice. Sometime I will reheddle and see if I can figure out where that errant warp came from.

Posted by bittenbyknittin at 2:31 PM No comments:

I thought we were supposed to warp our inkle looms for the Saturday workshop, but I was wrong; warping is part of the workshop. I can see why because it is different from any other inkle warping I have done before. There has also been some confusion over when the workshop starts, as the instructor is on CDT, not EDT. That has been straightened out.

Knitting: Still working on the Habitation throw (and will be for a while).
Spinning: The red Tunis is FINISHED!!! I still need to weigh and label the skeins. There is a LOT of yarn. I have no idea what I am going to do with it.


Weaving: Carefully removed the warp on the inkle loom in hopes of restoring it at a later date. I used painter tape to hold it all together.

I'm posting this progress report a bit earlier than usual because it will be a busy weekend. There is the "Turned Krokbragd on an Inkle Loom" workshop on Saturday, so my usual Saturday chores are pushed to Sunday. Then I need to prep the house, deliver the dogs to the kennel, precook some meals, etc. in anticipation of surgery. A lot going on at the last minute, it seems, even though we decided to skip the Michiana Pottery Tour this year.

Posted by bittenbyknittin at 11:33 AM No comments:

When I decided it was time to start the second half of the Habitation throw, I went looking for another set of needles in order to avoid removing the first half from its needles. That's when I discovered that I am not knitting it on US6 like the pattern calls for, but US9. At first I could not figure out how this happened. Initially I was playing around with knitting the pattern with worsted weight yarn and must have neglected to switch needles when starting with the fingering weight yarn. Since this throw is for me, I am not starting over.

Knitting: It will take me a while to catch up with the first half of the Habitation throw. 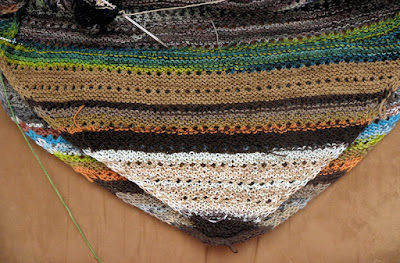 Spinning: Most of the red Tunis is plied. One spool is empty, and I will probably two-ply the rest.
Weaving: I got burned out on the letters and numerals on the inkle loom. The warp needs to come off so I can prep for the inkle workshop next Saturday. I'm going to try to preserve the warp so I can put it back on at a later date.

Several years ago, the weaving guild I belong to visited the Wabash Woollen Works. I thought it would make a nice outing for the spinning guild as well and have been organizing that. At first, I wasn't sure there was much interest, but I was wrong. It won't be until November, so I should be healed enough to go, courtesy of my SO/chauffeur.
Posted by bittenbyknittin at 11:57 AM No comments:

It's been another one of those weeks where bad news piles up on the personal front. A friend in hospice on the one hand, family drama on the other. At least I am peripheral to the family drama, just playing a supporting role. Still, it is rather unsettling.

Knitting: I'm almost to the halfway point on the Habitation throw. Instead of knitting it end-to-end, I'm going to knit each half, then graft them together in the middle. The end result will be a bit larger than the 40" x 40" size described in the pattern, but that's okay. When it comes to throws, the bigger, the better.
Spinning: I started plying the red Tunis - huzzah! 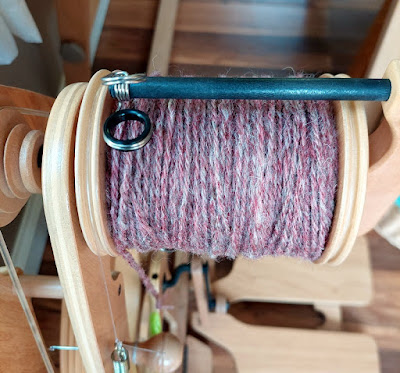 Weaving: The inkle band has been rather frustrating this past week. After struggling with the wider letters, I decided to move onto the numerals. But they are difficult, too. Sometimes inkle weaving looks wonky on the loom, but evens out when the tension is released. I'm counting on that. 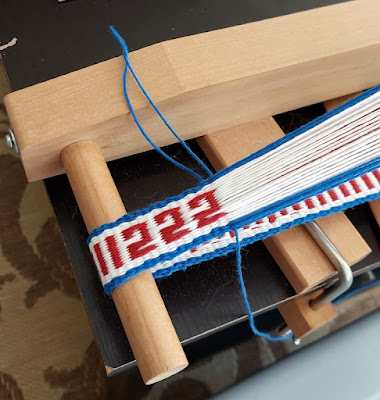 I bought a new cell phone (some would say, FINALLY). What pushed me over the edge was one app I depend on no longer worked on my old (old, old) phone. The purchasing process just about sent me over the edge as well. Later, I noticed a cell phone kiosk as Costco. Next time, I told myself, I check there first.
Posted by bittenbyknittin at 2:32 PM No comments: