How many days until xmas?

I like to gift handknit socks for xmas, but that means thinking sleigh bells before summer is even over.  It may also mean a false start or two.

A while back, I became frustrated with muddy-looking self-striping yarns, so I purchased a small boatload of Sassy Stripes.  And while I am perfectly content to knit plain vanilla socks, I feel gift socks should be something special.  I selected the Rock-A-Bye pattern from Joy of Sox

.  Initially, I liked the contrast of the diagonal columns with the stripes, but the more I knit, the less I liked the stitching. 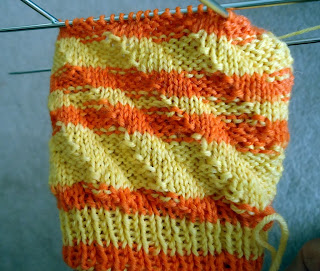 I don't know what you call it when the purl stitches show through the knit stitches, but I did not like the result, as the stripes lost their crispness.  So let's do plain vanilla. 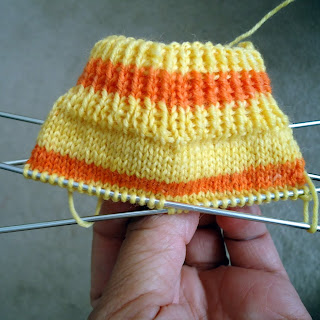 Ah, that's better!
Posted by bittenbyknittin at 9:07 AM No comments: Links to this post

I got it into my head that I was going to finish the Clapotis by this past Saturday, so that I could wear it to a wedding. So I knit and knit and knit some more, my left shoulder whining "Are we there yet?" all the way.  Friday night, with just the decrease rows to go, I tried on my intended wedding outfit and discovered there was no way I was wearing that sausage casing ensemble.  Quick change of wardrobe plans to something more comfortable meant no Clap at the nuptials, but that was okay because there was no way in hell I could have finished the shawl anyway.  It seems like the decrease rows should take no time at all, but they do, as do the weaving in of the ends and the dropping of the stitches.  I finished it last night while watching pre-season football. 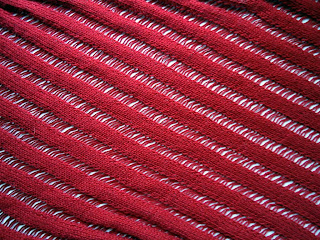 The thing is huge and, despite its open appearance, warm.  I am looking forward to wearing it this winter, BUT the yarn sheds a bit, so I will have to be careful what I wear it with.

Not all baby all the time 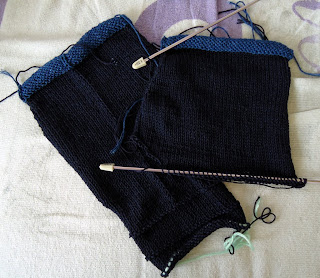 ... when I had the urge to knit something not baby-related. 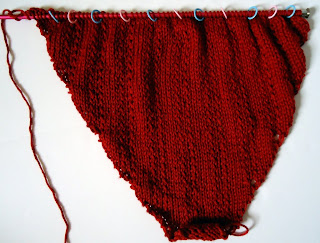 This is Clapotis, which also may be found at knitty.  I am probably the last knitter alive who has not made one of these, but when I saw some knit from Cascade Pima Tencel on Ravelry, I could resist no longer.  I purchased the Pima Tencel a long time ago, tried it with several patterns but did not like any of the results.  It seems perfect for a shawl/wrap/scarf thingy because it is quite drapey.

Public Service Announcement: XMAS IS COMING, sooner than you think.  If I want to gift handmade socks again this year, I'd better get going on that.

BTW, the baby shower was a success.  My daughter's BF organized it and helped me clean the house beforehand(!) and decorated.  I cooked up a ton of food that was greeted enthusiastically by the crowd (you'd think these people had never eaten homemade potato salad before).  We ate, my daughter opened a boatload of gifts, we ate some more, then everyone cleared out.  Fun, but whew!
Posted by bittenbyknittin at 10:32 AM 1 comment: Links to this post

Button, button, who's got the button?

Joanns had a sale on buttons last week - 50% off!  (Joanns is one of those places you should never pay full price.)  So I bought buttons for most of my buttonless baby sweaters. 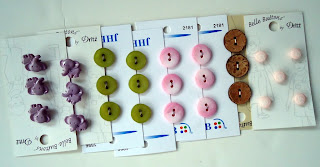 Of course, the buttons are still not actually on the sweaters yet.  Instead, I started knitting a pair of Blu jeans, from Mason-Dixon

Fun!  But my shoulders do not like knitting with cotton.  I'm not quite sure what it is I do when I knit with cotton, but my left shoulder objects strenuously.

You won't hear much from me this week (like that is anything different) because there is a baby shower happening here next weekend.  Must clean!
Posted by bittenbyknittin at 4:50 PM No comments: Links to this post

Sorry for the long silence.  I was out of town, on a combined business/pleasure trip to New England.  The business part was a training class.  The "pleasure" part was more of a family-obligation/aging parent thing.  All I can say about that is, Old age is not for sissies.  It does not get any easier.  Then after I returned home, I got sick.  Diagnosis (so far) is UTI.  I think there may be something else going on, but I'm willing to give the antibiotics a try.

Anyway, knitting did occur while I was gone.  In an effort to travel light, I packed a minimum of yarn, knowing from past experience that I never get as much knitting and/or reading done as I expect to on trips.  I also took a book on CD, so I could "read" while I knit in the hotel(s).

But first, knitting occurred in airports. 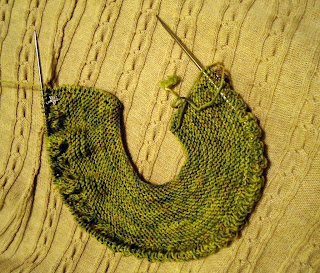 I checked the TSA regulations beforehand, but did not see anything about knitting needles.  However, since I was traveling on smallish planes that were full up, I chose not to knit en route because, seriously, there was no elbow room. 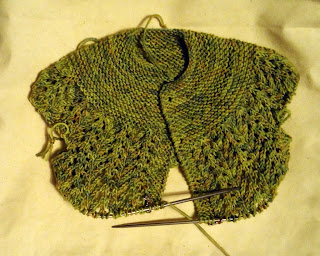 Visiting my stepmother in the rehab unit (she is recovering from a broken leg AND hip) proved to be good knitting time, as did watching the Cubs on TV later that night.  (The Red Sox were playing on the west coast - way past our bedtime.) 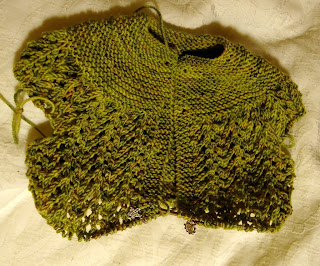 After a couple of days with family, I changed towns to attend the training.  Per usual, we all had to introduce ourselves, including our hobbies.  That gave me the opportunity to ask if it was okay to knit in class.  The instructor agreed, but sometimes the training was just too intense for me to do so. 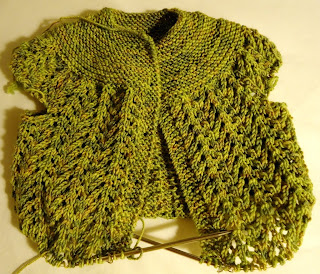 The traffic around Boston is just horrendous.  A trip to my brother's house took 30 minutes, but the trip back to the hotel took almost two hours because someone thought it was a good time to do construction and reduced the interstate to ONE LANE.  FOR MILES, even though the construction area itself was short. 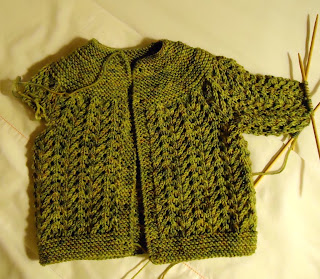 After that experience, I did not want to drive anywhere in the evenings, and instead settled in for a good listen to Broken by Karin Slaughter.  The story is so enthralling and the performance so engrossing that I did not realize what I was knitting until I held up the sweater and found I had knit the cuff on sleeve number two without having actually knit the sleeve. 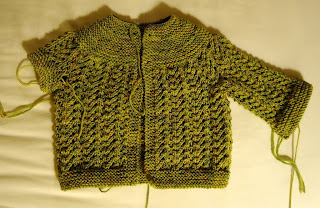 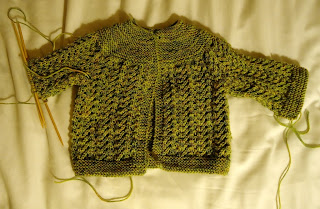 The next night, I decided I did not like how the sleeves bell, so I reknit the cuffs to include a round of decreases. 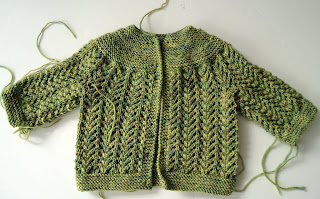 And then, in a panic over having something to knit on the way home, I started a pair of leggings. 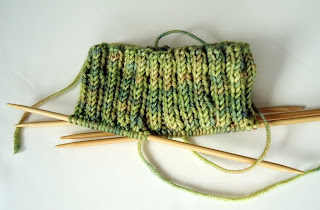 Some yarn stores were visited as well.  One, the Yarn Basket in Fitchburg, I have visited before.  No surprises there, but I did snag a couple of skeins of pink camo.  Somewhere I have a pattern for a blanket using this yarn. 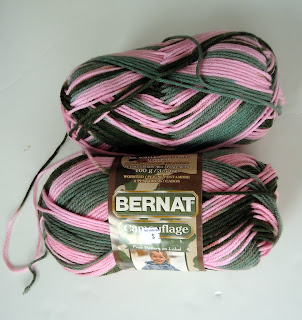 I also visited Edwina's Knitch in Burlington.  All I purchased was a couple of blanks from Happy Feet, with the intention of dyeing them, even though there was some lovely lavender sock yarn I was pining for.  I had to limit my yarn buying because there was only so much room in my carry-on for anything besides a week's worth of clothes.

For the record, I flew Delta/Northwest through Detroit and experienced no problems or delays.  I stayed at Hampton Inns, which offer free breakfast and high speed Internet and are always clean and comfortable.  Everywhere I went, people were friendly except for one b*tchy lady at the service counter in the Manchester NH airport.  All in all, a successful trip, but I am glad to be home.
Posted by bittenbyknittin at 1:30 PM 1 comment: Links to this post