I purchased this "roving rose" at the Jay County Spin-in in 2014. There was an ounce of white, an ounce of navy, an ounce of pink, and an ounce of blended colors, in llama, alpaca, and wool. I grabbed it to take with me to the February meeting of the local spinning guild and spun up the already-blended bit. 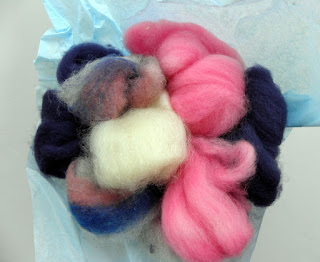 I tried to blend the solid colors on-the-fly at the meeting, but that was a FAIL. So later that week, I experimented with blending the three colors at home, using all the tools at my disposal. 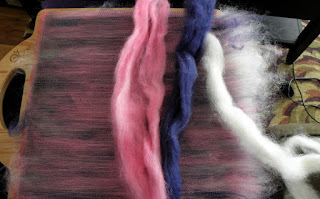 A blending board is absolutely perfect for blending roving. You just "paint" the board with the fibers, layering colors as you wish. 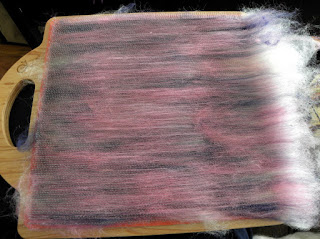 The result is a fat sausage of a rolag. If the colors seem too separate, you can re-blend them, until they meet with your approval. 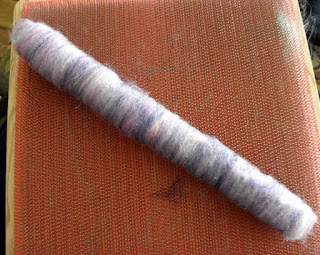 I didn't take notes, but I think I re-blended these rolags at least once, if not twice. 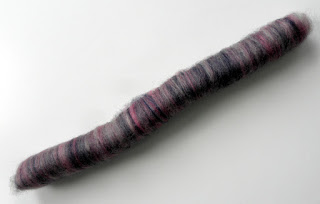 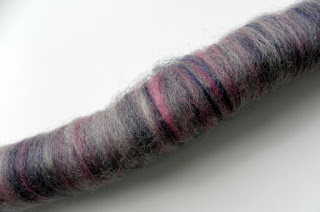 I also tried blending on my new drum carder. This worked fine, although it would take some experimenting to get the combination you want. 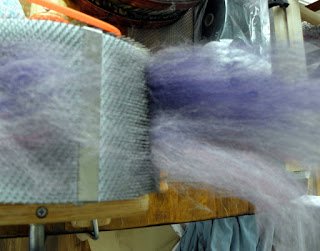 The resulting batt can be run through again (and again) but from this pic, I think I opted out. 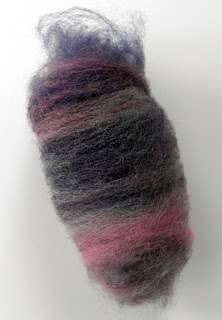 Hand carders may also be used to blend fiber, sort of like a mini-blending board. 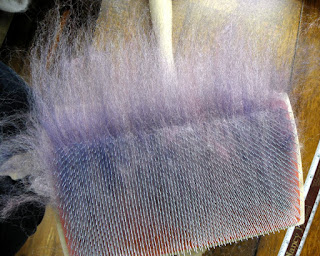 I'm not very adept at using the hand carders. 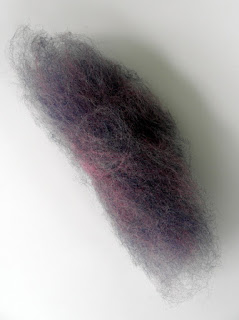 Of these three methods, I like the blending board best. The rolags are fat and tight, and I think you have better control of the outcome.

More fun: spinning the blended fiber! The different methods produced different yarn, depending on how the colors mixed and fed into the wheel. 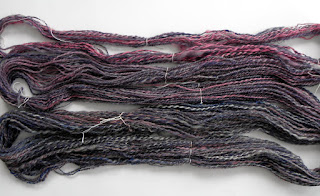 So now there are four ounces of llama-alpaca-wool, enough for a nice cozy pair of mittens, methinks. I have plenty of hats and scarves but not enough handwear. 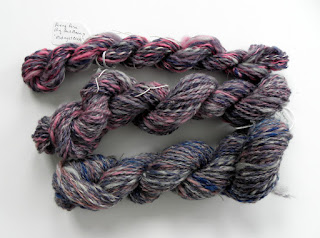 But first, I'll take the yarn to the spinning guild for "show and tell".
Posted by bittenbyknittin at 2:07 PM No comments: Links to this post

While I have a regular method for reporting on knitted FOs, I am still struggling a bit with woven goods. It would help if I kept some notes as I go along. Usually I do this in Ravelry for knitting; now I can do the same for weaving AND spinning, if I just get into the habit.

My goals with this scarf were to explore color and color inspiration (hence the "daffodil" theme) and to play with plaid. I think I achieved these goals. An ongoing goal is to create even selvages; while there is less pull-in with this project, the selvages are still rather raggedy. 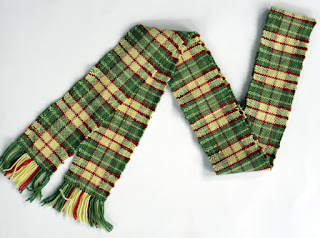 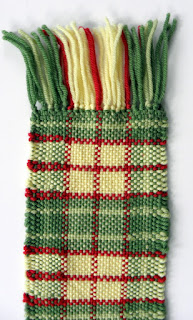 I am still beating too hard, so the goal of 10 ppi was not met. I also was a bit confused over which heddle I was using, as at first I thought it was the 7.5 epi one. Like I said, I need to keep better notes, from step 1 on. 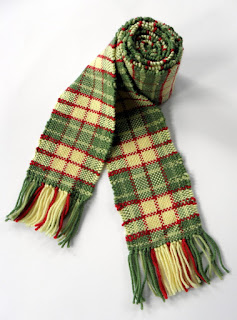 Personally, I prefer worsted weight yarn for scarves, be they knit or woven. I just happen to have a fair amount of DK superwash on hand, so that is what I am playing with.
Posted by bittenbyknittin at 1:18 PM No comments: Links to this post

Blew out my felted slipper

I made these felted slippers in 2009. They were for my SO, but for some reason he left them at my house and rarely wore them. This past winter, I reclaimed them. It didn't take long for a hole to open up in the heel. 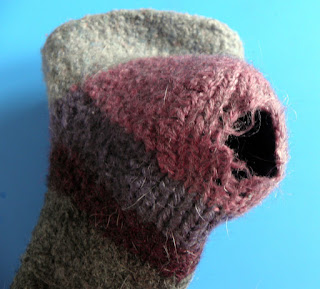 In a way, I am glad this happened, as I have been contemplating stash busting by making more of these. Now I know that I need to double up on the heels and/or add a sole of some sort. 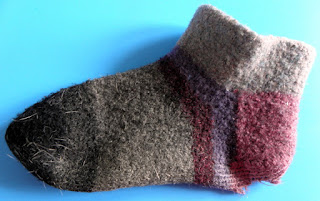 I've also been contemplating how to fix these or at least repurpose them. Any suggestions?
Posted by bittenbyknittin at 11:19 AM 1 comment: Links to this post

I belong to a rigid heddle group on FB. This is a great way to get fresh ideas about weaving. Suzanne de Lugo tried painting the emerging cloth on her loom with fabric ink pens, working on a neutral colored, plain weave, acrylic "canvas". She is quite the artist to begin with, and her experiment was inspiring. 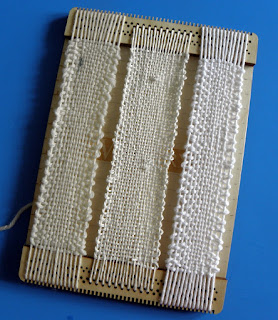 So I wove up an experiment of my own, on the 3-in-1 Swatchmaker. I used wool, linen, and cotton as my yarn and created three pieces for my granddaughter to draw on, figuring if nothing else the objects could become bookmarks. 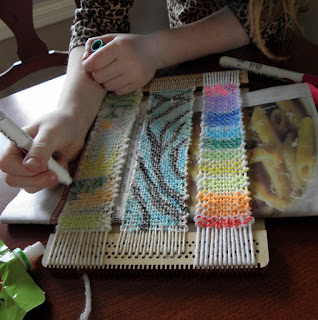 The linen worked the best, as it creates a fairly flat fabric. Cotton was a close second and probably would work better with a tighter weave. Wool was too fuzzy to work on. 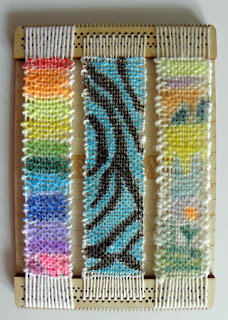 I thought it might be fun to weave up some linen or cotlin towels for Nora to draw on and color. However, her interest in this activity waned rather rapidly. I keep trying to encourage her craftiness but so far no luck.
Posted by bittenbyknittin at 11:13 AM No comments: Links to this post

Today I decided to re-scour the two-pound hunks of fleece, as they just did not look very clean. I was aware of my impatience at the time, otherwise I might have picked at the fleece more before scouring and/or stuck with processing one pound at a time and/or soaked the two-pound hunks one or two more times in Power Scour. Today, while I was more patient, I also treated the fleece a bit more roughly, trying to dislodge more of the dirt. Fingers crossed that the fiber did not felt at all.

There was a one-pound batch that I pre-treated by teasing the locks apart before scouring. That bit looked pretty good, so I put some of it through the drum carder. I quickly learned not to feed too much in at a time. Also, expecting to process even one ounce at a go is a bit optimistic, as my drum carder is only 4 inches wide. 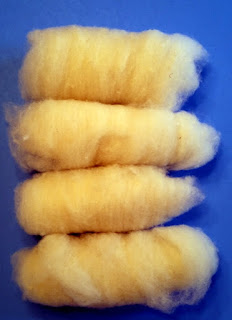 The color above is not accurate - the fiber is white. There are also pills or nepps in the fiber, presumably because I did not sort out the second cuts (shorter fibers caused by the shearer making a second pass over a part of the sheep).

Earlier this week, I also hand carded some of the fiber, just for fun. Some people think hand carding is faster than drum carding, and I can see why, but each has its place in the process. I also have a blending board, but I think that works better with fiber that is already carded. 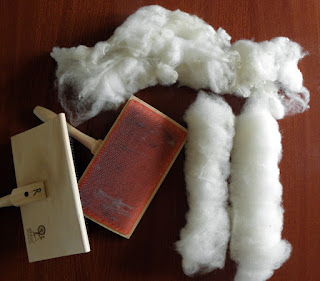 There is more, much more, to do before I am done with this fleece. And by "done", I mean carded and ready to spin. It's a lot of work, but I'm enjoying it. So far.
Posted by bittenbyknittin at 6:18 PM No comments: Links to this post