Friday morning I took a workshop, officially titled "Needle Felt a Fairy Tale Pumpkin", through our local parks and rec department. I wasn't all that interested in needle felting, enrolled so I can transfer knowledge to my granddaughter, but this fiber art is not only fun but addicting.

The instructor Sue Powe belongs to my spinning guild. During the show-and-tell portion of our meetings, she invariably has a sculpture to share. She also sells them at fiber fests and through a local retailer, Fae's Closet. Whimsy is her forte. 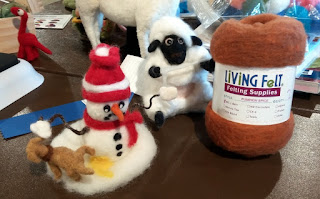 (In the above picture are two of Sue's sculptures, a sad snowman and a sheep spindling her own wool. The red dinosaur in the back was created previously by one of the students. The colorway of the wool is "Pumpkin Spice" - of course.) 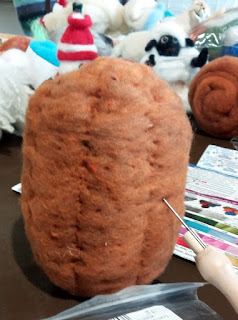 Sue's background includes ergonomics, so she helped us learn how to felt without developing carpal tunnel. We examined lots of wool before getting down to business. Repeatedly stabbing a hunk of wool sounds boring and tedious, but for some reason it is fun and relaxing - as long as no fingers get pricked. My pumpkin isn't quite done yet - I want to add more to the body. Also, I made the mistake of leaving my pumpkin on the kitchen counter while I ate lunch. Beau the Feline Destroyer of All Things Nice got hold of it and did some damage. Fortunately, the pumpkin is repairable. 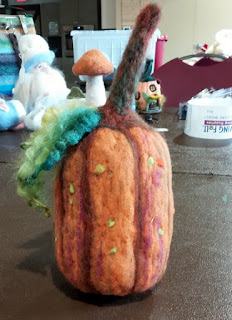 There were only four students in the class, so we received lots of individual attention. Two students were age 11 and 12, and their pumpkins turned out great. I also now have a couple of ideas about how to direct my granddaughter's needle felting: use cookie cutters to create shapes and felt on top of Styrofoam balls for xmas ornaments. Stay tuned for more needle felting.
Posted by bittenbyknittin at 2:04 PM 2 comments:

Brief wrap-up of the week that was.

Knitting: Finished the knitting of the Veronika cardigan, and it is blocked as well. Just need to do a little mattress stitching. The socks are ongoing.
Spinning: I'm spinning singles to ply with the slubby yarn I've been trying to master.
Weaving: Put on my big girl pants and fixed the broken warp. That success was followed by a badly executed rya row. I'll get the hang of it yet.
Needle felting: Took a 2.5 hour workshop, created a 3-D pumpkin. Fun and addicting!

Posted by bittenbyknittin at 1:31 PM No comments:

(Is anyone else old enough to remember the TV show That Was the Week that Was? AKA TW3? Anyone? Anyone?)

In regards to yesterday's post, I'm not sure I could keep up with daily reports on my progress. Perhaps once a week is doable? We'll give that a try.

So what am I working on?

Knitting: In the homestretch of the Veronika cardigan. All that is left is ribbing along the back, plus a little bit of sewing. A pair of socks is halfway up the calf.
Spinning: I'm trying to teach myself to make slubby yarn. Yesterday I tried wrapping the yarn with thread as I spun. Tricky!
Weaving: I'm working on a rya bag on my frame loom, but a couple of days ago I broke cut a warp thread - ugh!
Dyeing: Picking clusters of pokeweed berries; froze some, put some in the garage on a drying rack, as they tend to dry on the stem anyway.

Posted by bittenbyknittin at 4:32 PM No comments:

Do you fiber every day?

A while back I wasn't spinning yarn because I had some very nice roving but didn't want to spin it until I became a better spinner. Then two things occurred to me:

So I pulled out a big ball of luscious Lincoln top and spun away. The more I spun, the better I got. I also lost my dread of plying because I had to ply those singles to free up bobbins. I am not the best spinner in the world, but I feel much more comfortable at the wheel now.

When I first returned to knitting oh-so-many years ago, I would knit about anything, just to be knitting. I knit at work during meetings, I knit in the car (while a passenger), I knit on planes, in hotel rooms, at home in front of the TV. Then I just sort of stopped. Learning to weave might have had something to do with it, but I think it more likely was the realization I had knit a lot of stuff that not only did I not want to wear, but nobody else did either.

I faced the same dilemma with weaving as I did with spinning: it was hard to just be willing to DO IT and SUCK AT IT for a while. I am still a long way from feeling at ease at a loom, as every project is a learning experience, but it's getting better.

Being retired has provided me with enough time to practice fiber arts every day. It is not unusual for me to at least spin a bit in the morning and knit a bit in the afternoon. Now I would like to weave a bit every day as well, plus process the multiple fleeces. Sometimes it feels like I never finish anything, but bit by bit, I will get there.

So I'm contemplating somehow reporting on this blog what I work on each day. It will have to be a brief summary, perhaps in a sidebar, or it won't happen. My goal is twofold: to have a record of sorts of my daily fiber output and to demonstrate that slow and steady completes the project.

When I mentioned to my fiber friends that I try to spin for 30 minutes a day and knit for 30 minutes a day, I get what are surprising-to-me negative reactions, like I'm turning a joy into a duty. But the more I spin, knit, weave, etc., the more joy I get from fiber. Writers write every day (at least, the successful ones do). I think fiber artists could take the same approach.

Does this resonate with you? Or am I being insufferable?
Posted by bittenbyknittin at 5:38 PM 2 comments:

A while back, I was playing around with some tapestry techniques. There are several ways to introduce gradient effects to a tapestry, but the book's method was a big fail for me: separate plies from (commercial) yarn and combine the plies of different tones to create gradients. The yarn I was working with snarled and snapped at me when I tried this. Then it occurred to me that, since I'm a spinner, I can create my own gradient yarns. Taking a workshop on spinning gradient yarns didn't hurt, either. 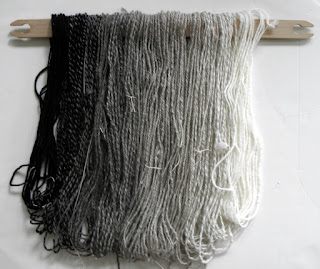 Starting with a range of roving, from black to white, I 3-plied a bunch of combinations:
Yes, this was a bit tedious, but I am very pleased with the results. The plan is to weave a tapestry using these yarns. But first, I have to show them off a bit.

Email ThisBlogThis!Share to TwitterShare to FacebookShare to Pinterest
Labels: spinning

I like indigo as a color, but I am not thrilled with the process for dyeing yarn with it. I've experienced it only in dye workshops (described here and here), never tried it myself at home. It requires several steps and a certain amount of care or you can easily ruin the dye bath.

However, I do have blue false indigo (Baptisia australis) growing (and growing and GROWING - it spreads by rhizomes) in my yard. Even though false indigo is not related to any of the true indigo producing plants, I figured it would not hurt to test it.

But first, I did a search online to see if anyone else had tried this experiment. I can find references about using false indigo for dyeing (and references that say it is NOT a dye source), but I did not notice anything specific. Please correct me if I am wrong.

I am not quite done with this experiment, but I decided to show you what I have so far. I didn't do anything too fancy, just in case my tests were a total bust. I used alum mordanted Cascade 220 in dye baths containing the blossoms, leaves, stems, pods, or seeds. For each plant part, I poured boiling water over about 12g the plant part, let it set overnight, strained the dye bath, added about 2 yards of yarn, popped it in the microwave for a minute, again let it set overnight, and then rinsed the yarn. The results were a bit surprising.


No blue, but several shades of green and yellow. The only plant part remaining to test is the root. I'm waiting for the plant to die back this fall before digging up some samples.

Now my interest is piqued. What if I used no mordant or a different mordant? Modified the results post dyeing using an acid or alkaline bath? Used tap water, distilled water, well water, rain water? How light fast are the results? Stayed tooned!
Posted by bittenbyknittin at 12:55 PM 1 comment:

Even though I don't post here very often, I do some kind of fiber art activity everyday. It just takes me a while to get to the point of showing you something. Today is the result of days of spinning and plying some alpaca. 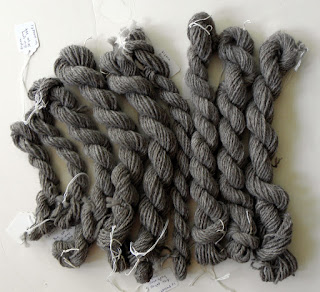 In 2009, I purchased about 8oz of alpaca at our local Johnny Appleseed Festival. It came from an animal named Spartacus who lives on the Michel Century Farm in Huntington, IN. Alpaca fleece has no lanolin, is smoother than sheep wool, and is very warm. Spartacus was a rose gray huacaya. Since the fiber felt finer than wool, I spun it worsted at a ratio of 8:1 on my Joy2 Ashford wheel. The result is 330 yards of 3-ply. (I haven't measured the WPI yet.) 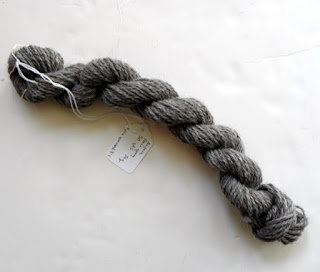 Alpaca fiber supposedly does not need to be cleaned before spinning, BUT. The roving felt dirty, and my spinning fingers attest to the fact that is was dirty. Yet, when I soaked the yarn to set the twist, the water remained clear. I am making a mental note, however, to wash the yarn before I dye, knit, or weave with it. Even if I forget my mental note, the feel of the yarn should remind me. 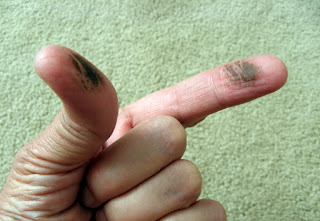 In general, I am not a fan of alpaca. However, it's durable, resists pilling (VERY IMPORTANT TO ME!), blends well with other fibers, and dyes well. I may have to reconsider my bias.
Posted by bittenbyknittin at 11:31 AM 1 comment: