Even though my family celebrates xmas on xmas eve, I usually feed someone on xmas day. Not this year. Some might think it sad to spend xmas day alone, but after all the flurry of xmas preparations, I was ready for a day of R&R.

To get through all the holiday knitting, I listened to a lot of books on CD, the most recent one Stephen King's Under the Dome (30 disks!) Not quite done with that story, I binge-listened while I binge-knit this hat for my g'daughter. 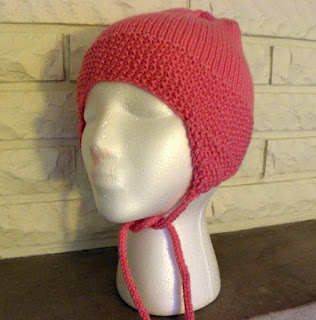 Pattern: Official Kittyville Hat, by Kitty Schmidt
Yarn: Cascade 220 Superwash, in colorway 838 (pink)
Needles: US7
Modifications: worked and reworked the ear flaps until I was satisfied (see below); also, no ears.

I've knit this hat before, but always in dark colors. In pink, the ear flaps just did not look right along the edges. I tried this, that, and the other thing, and finally settled on slipping the first stitch of each row knitwise, then always knitting the last stitch of each row. That seemed to clean them up, at least well enough. 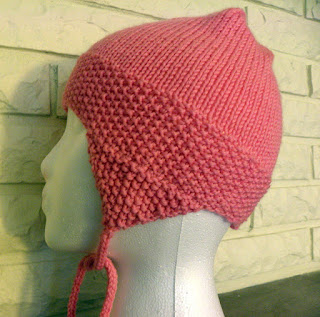 Ordinarily, I would knit this yarn on US8 needles. Since my g'daughter is but five, I used US7's with the hope that the tighter gauge would mean I would not have to adjust the pattern to get it to fit her smaller head. She hasn't tried it on yet, but the styrofoam head is close to the same size as hers, so here's hoping.
Posted by bittenbyknittin at 9:01 AM No comments: Links to this post

This pair of xmas socks went much smoother than the others, helped by the absence of ribbing except at the top of the leg. They were for my daughter, so they are also in a smaller size than the other xmas socks, so knit up relatively quickly. Thank god. 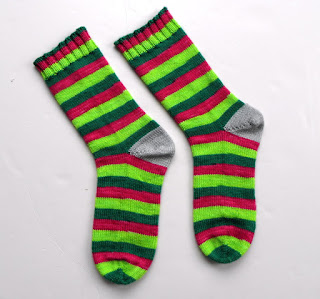 The quality of the dyeing of the Poste Yarn makes stripe matching a breeze. Again, the 'Silver Lining' was a good selection for the contrasting heel. I've also learned that, when folded at the heel, the sock leg should be about the same length as the foot, or there will be complaints about them being too short. 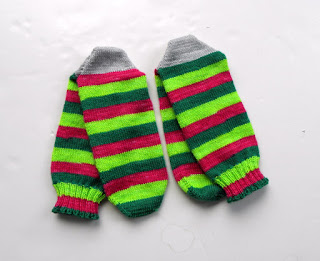 So, three pairs of xmas socks were ready and waiting on xmas eve. I am knitting a pair for my SO, and may just have to knit a pair for myself, as the colorways are so enjoyable. Then I may take all the leftovers and knit up a crazy pair of socks or gloves with them. Wouldn't that be fun?
Posted by bittenbyknittin at 8:47 AM No comments: Links to this post

Xmas is over, and per usual, I didn't quite finish all my xmas knitting. Most, but not all. I'll post what did get done over the next several days, before the xmas spirit departs for the North Pole.

I think I knit these socks twice over, as I struggled with needle size and fabric density and angry knitting gods. I even managed to bind off too tightly, despite using Jeny's Surprisingly Stretchy Bind Off. The needles were a square set which I grew to detest, not because of the shape but because of how sharp they were. Note to self: save them for lace knitting. 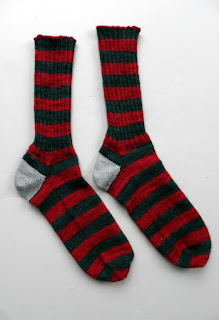 The chicken-legged men in my immediate family prefer ribbed socks, another annoyance, as I have never fully mastered the art of the purl, despite much practice. Fortunately, the troubles of this pair were balanced by the wonderful yarn in wonderfully xmas colors, enhanced by the contrasting heel. 'Silver Lining' worked with every pair of xmas socks I knit. 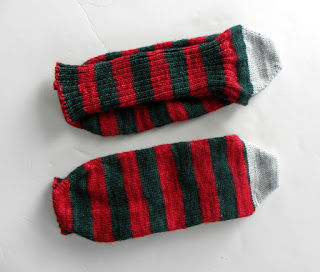 These socks were for my son-in-law, who is usually non-committal on my knitted gifts. I later asked my daughter if they fit okay, and she said, "I guess. He's wearing them." That is a good sign.
Posted by bittenbyknittin at 8:34 AM No comments: Links to this post

Because I hate the pointy square needles I am using for one pair of xmas socks, this pair, started at a later date, reached the finish line first. This pair is also the largest to be knit, so I am happy to have them done early. Theoretically, the others should be a breeze. (HA!) 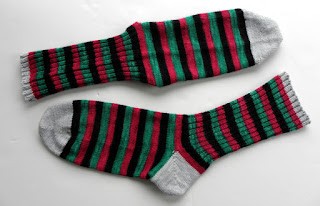 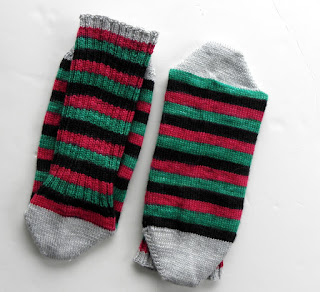 Since these are knit big (80 stitches around), I knew I would need some extra yarn. A worker bee at Simply Socks recommended the 'Silver Lining' colorway, and I *really* like how it looks with the stripes.
Posted by bittenbyknittin at 2:49 PM 1 comment: Links to this post

Honey cowl for my little honey

I decided to knit my g'daughter a Honey Cowl. Since she is but 5 years old, I chose the middle length and made it only half as wide, but I think I could have gone with the full length - kid heads are not that much smaller than adults. She loves pink, so pink it was, pretty much guaranteeing that she will actually wear this handknit. 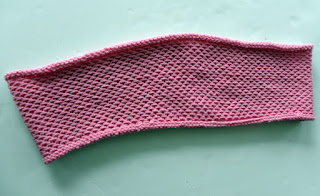 Trying to photograph a cowl without a live model is not easy. Mr Manly and The Head helped, but in a rather macabre way. 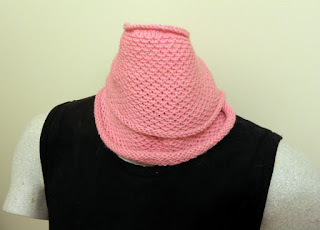 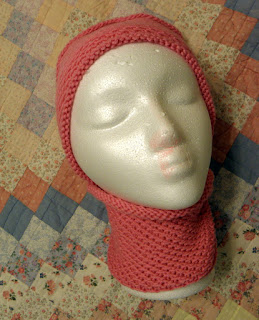 Had I had knit this with US8 needles on DK yarn, it would have had more drape, I'm sure. Something to keep in mind if I make another one of these. And I might: this is my second one (first one is here), and it is an easy, relatively quick knit.
Posted by bittenbyknittin at 2:46 PM No comments: Links to this post