Under the "Art Exhibits" listing in the local paper was an item about an exhibit of wool and silk oriental rugs from Tibet and Nepal. Since the venue, Aaron's Oriental Rug Gallery, is right here in Fort Wayne, we decided to take a look. And now I am hooked on oriental rugs. 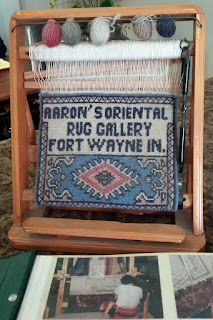 First off, my idea of what an oriental rug is was WRONG. They are not precious things to protect from foot traffic but unique and usable works of art that last a lifetime with reasonable care. And they are not all of a stereotypical design. They may seem expensive, but considering that they are hand made AND long-lasting, the prices are actually quite reasonable. But it is important to purchase from a reputable dealer if you want a quality rug.

I wish my photos did justice to the beauty of these rugs, but nothing replaces viewing them up close and personal and TOUCHING them. The ones from Nepal and Tibet are made of wool and silk; when you look at them from different angles, the light reflects off the silk differently, creating changes, some subtle, some dramatic.

These rugs have a cotton warp and weft, and the fibers are knotted at the intersections of the warp and weft. Each one takes about 18 months to create. Some patterns are computer generated, but the work is done by hand, so there is always some variation. The advantage of the computer generated patterns is the same design may be reproduced in multiple sizes. Other patterns may have a repeating motif... or not. Many are quite abstract. They also have a lot of texture.

The rugs from Nepal and Tibet are piled rugs. We looked at some flat weave rugs in the shop, including soumak which is something I have woven myself in small quatities. These rugs are reversible. 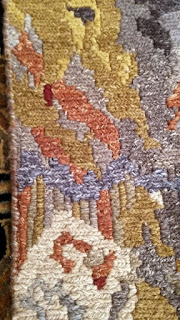 I think this one is a mixture of pile and soumak. 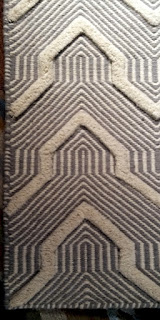 And now my memory of all the information shared with us today is failing. I think these are also examples of flat weave but they have a backing on them. 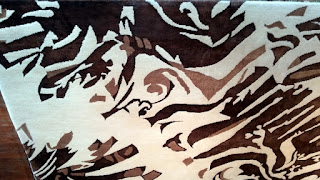 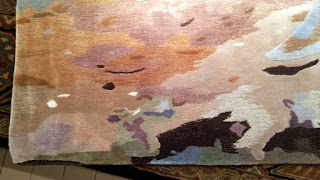 There were some rugs with geometric designs I really liked. While some people put them on top of carpet, I'm thinking my studio, with its laminate wood floor, would benefit from an oriental rug, one I could do yoga on. Ideally, one would pick out a rug and use it as the starting point for the room's decor, but we don't live in an ideal world. Besides, walls are easy to repaint.

Do YOU have an oriental rug? What's your opinion of them?
Posted by bittenbyknittin at 7:32 PM No comments: Links to this post

Sorry I haven't posted in a while. I do have some projects going - a pair of socks on the needles, a tapestry sampler on the loom, spun yarn - but nothing is finished right now. Also, I had a flare up of diverticulitis; in some ways, the medications are worse than the disease, leaving me in a fog. But I'm better now (except for that metallic taste in my mouth, courtesy of Flagyl), so my SO and I trekked over to Moontree Studios to take a look at "Interlacements", a show of student work from the Chicago Weaving School. We were impressed.

(An apology to all the artists represented here, as I neglected to jot down their names. Mea culpa! Also, this is just a sample of what was in the show.)

A while back I knit a mini curtain for my kitchen window, to filter the late afternoon sun so I could wash dishes without going blind. I'd like to replace it with woven scrims like these two (of several). 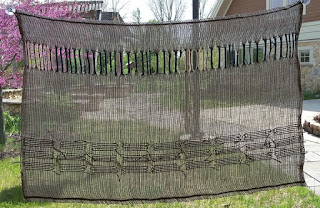 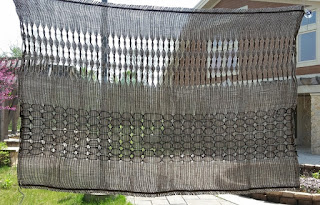 The tapestry sampler I am working on includes sections of pile weave. I can see doing something like this shaggy rug as a stash buster, as most of my stash consists of yarn left over from other projects. I wish I could have picked up this work and examined the back, to better see how it was done. 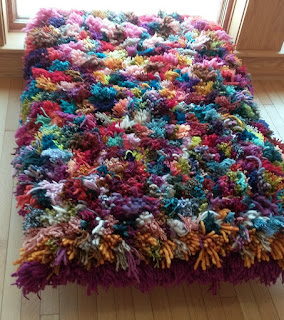 This piece had no title but it looks like a garden to me, with blue sky above. I think it is an example of boundweave? 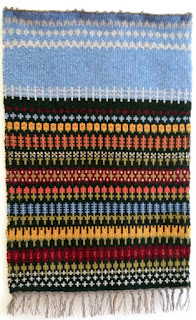 Sheila Hicks may have inspired this piece. 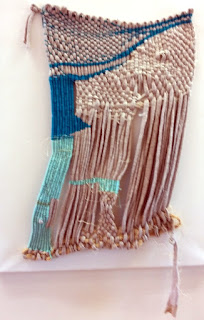 I want to say this was MY idea. I've been contemplating creating a kimono/poncho piece like this, using inkle woven bands for the collar/placket. I like the use of large ornamental buttons. 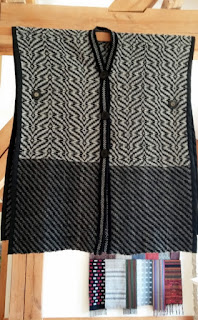 I'm not much of a seamstress, but I should be able to make a simple top like this, right? The hardest part is taking scissors to the handwoven fabric. 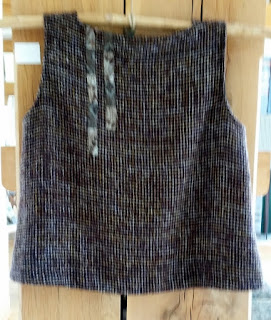 Here is an example of displaying cloth woven flat but displayed sculpturally with the help of some driftwood. It's all mounted on what looks like barn siding. 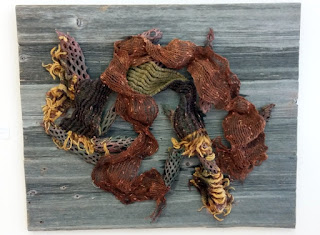 Two pieces were of photographs sliced horizontally and woven together. The funny thing is I purchased my granddaughter a Melissa and Doug loom that does just this. Now I can see how the result could be mounted. 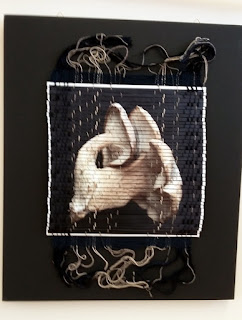 The section I am currently working on with my own tapestry sampler is curves using a "cartoon" as a guide. This could be done free form, too. To the naked eye, this piece looks like clasped weft. 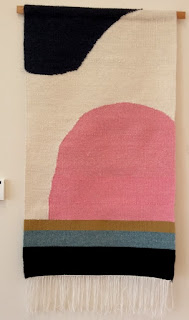 One can look at photographs of weaving in a book all one wants, but it is not the same as getting up close and personal (without touching!) the actual piece. The Chicago Weaving School is basically a one-woman operation, but I am very impressed with the student work. I feel inspired!

Posted by bittenbyknittin at 7:40 PM No comments: Links to this post