I'm not very interested in yellow or green colors, which is mostly what one gets when dyeing with natural materials. Queen Anne's lace is no exception, but since I have (or had) a lot of Queen Anne's lace growing in the backyard, I decided to give it a try. According to Jenny Dean's Wild Color, dyeing with Queen Anne's lace without a mordant but with an iron modifier should result in gray. But that's not what happened.


In all fairness, the entry in Dean's book for Queen Anne's lace was also for carrot tops - the two plants are cousins - and she did say the color from carrot tops would be richer. But I decided to work with what I had on hand. I made sure there was a LOT of plant material in the dye bath, but the color still seemed rather thin.


The yarn I chose was Valley Yarns Northampton (100% wool), a 100g ball divided into four 25g skeins; since I was already working up a dye bath and an iron after bath, I decided I might as well mordant some yarn with alum too. Again, I used the cool method for mordanting, but I simmered the plant material for a good hour AND let it sit overnight. I also used the hot method on the yarn, simmering it for 45 minutes. Because of bad timing on my part, the yarn cooled in the dye bath for almost 24 hours. I also simmered the yarn in the iron bath, for about 5 minutes.


That was a lot of work for disappointing results. However, with natural dyeing there are too many variables to predict what will happen. I sample such small amounts I'm sure I can make use of these colors in something.

(Note: in a recent natural dyeing class I took, "simmer" was defined as 190 degrees. Using my ChefAlarm digital thermometer, which allows you to set a minimum and a maximum temperature, I was able to keep the temp between 190 and 200 without standing over the stove obsessively. I highly recommend this product.)
Posted by bittenbyknittin at 9:44 PM No comments:

Since I am on grandma hiatus for a couple of weeks, I decided it was a good time to tackle one of those projects I had planned for the summer. With school starting mid August around here, summer feels half over. Time's a-wastin'!

Project number one was to dye some yarn with onion skins. I had saved up nearly a paper grocery bagful of yellow onion skins - 5 whole ounces. According to Jenny Dean's book, Wild Color, this amount of onion skins would dye... 2.5 ounces of yarn. Wha'?!? It turns out that was not quite accurate, but it colored (heh) my decisions on how to proceed. The yarn I chose was Cascade 220 and Lamb's Pride, wound into approximately one-ounce skeins.


Also according to the book, if I wanted a nice tangerine color instead of yellow, I would have to mordant the yarn with alum. This I did, but using the cold, slow method outlined by Dean. After all, who wants to be slaving over a hot stove in July? I also ended up applying the mordant in two separate baths, as I kept changing the plan. This may have affected the results somewhat.


The only cooking I did was to simmer the onion skins for about an hour. After straining, this became what I called the primary dye bath. Then I simmered the onion skins for another hour, to create a secondary dye bath. I dyed a one-ounce skein of each type of yarn in each of these two baths, then another pair of skeins in each "exhaust" bath. I then combined the two baths and used that as well on another pair of skeins. I even threw two unmordanted skeins into the final dye bath, just for fun. The idea was to end up with a range of yellow-to-orange colors.


I'm fairly pleased with the results, especially the Cascade; the Lamb's Pride came out more murky.


I think these colors will work well with the henna-dyed yarn I created earlier this year.


Not wanting to waste a single opportunity to dye something orange-ish, I took an old yellow-stained-armpit but otherwise perfectly good white tank top and threw it in the final exhausted dye bath, without mordant (although I could have added some mordant to the dye bath itself. I always think of these things too late.)


Next up: dyeing with Queen Anne's lace.
Posted by bittenbyknittin at 6:57 PM No comments:

I bought a new car and wanted to take it on a long enough trip to test out some of the features. And so my SO and I traveled down to Decatur for their sculpture tour, then bopped over to Bluffton to view a yarn bombing. I can't find much info about this particular event, but a lot of hookers crocheted a lot of yarn to make this happen. 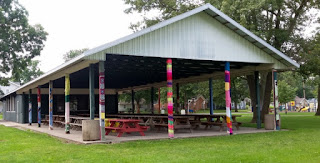 I admit I don't think much of yarn bombing - it seems like a waste of perfectly good yarn. Some of these objects were made with cotton yarn, some with what I am guessing is acrylic or an acrylic blend. But at least one was of felted wool. 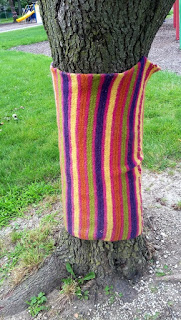 I used to crochet - a lot - mostly afghans, so I recognized most of the stitches and patterns, particular granny squares. 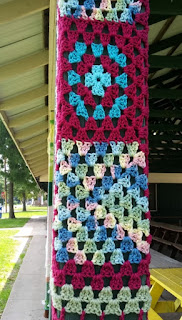 But some were a puzzlement. Is this crochet or macrame? 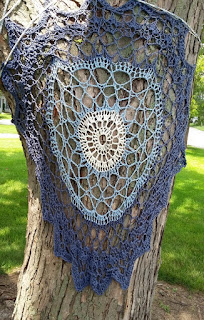 Almost nothing was safe from yarn, including the supports for hoops. If it was roundish, it might get bombed. 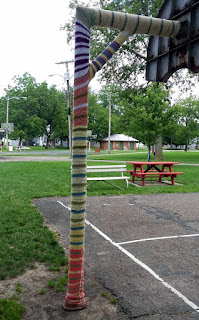 In the past, when I imagined yarn bombing, I pictured a bunch of knitters standing by a tree or pole, knitting in situ. From inspecting these works, it was apparent the crocheting occurred elsewhere, then the pieces wrapped around their intended target. 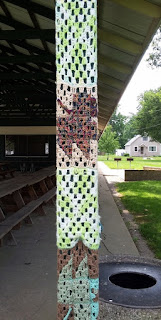 All this yarn bombing is at Washington Park (310 E Ohio) in Bluffton, Indiana, and is slated to continue through August. If you are in the neighborhood, be sure to stop by. 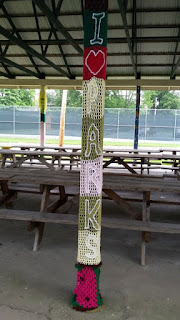 While I doubt I will become a yarn bomber, seeing a display such as this expands my ideas for just what one can do with yarn beyond socks and sweaters. It might be nice to look out my window on a dreary winter day and see a splash of color in the garden.
Posted by bittenbyknittin at 6:25 PM 2 comments:

My "inch by inch" plan quickly fell by the wayside. Too much yardening to attend to, plus fiber art feels more like a winter activity. However, I did finally manage to finish a pair of socks. 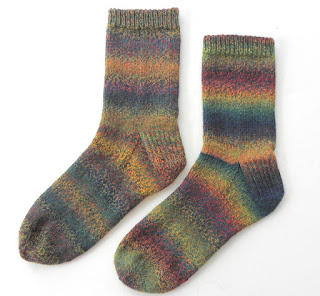 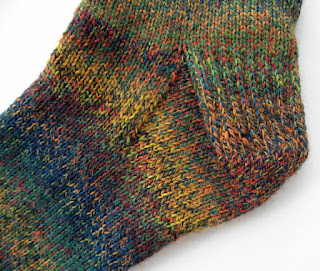 I think I have happened upon a method for eliminating the gusset gap at heel turns. Basically I continued the in-the-round knitting early, completing the final row of the heel turn from the opposite side. This prevents having an extra row to deal with, which is what creates the gap. That brief explanation probably doesn't make sense; hopefully sometime I will produce a tutorial for it. 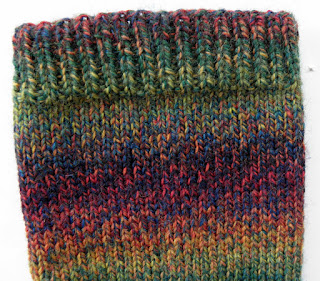 These are for a friend. While I ordinarily knit toe-up, I knit these top down because I knew I would be seeing her mid-project and I wanted to take a gander at her feet before completing them. My brain must still be functioning, as I was able to recall the Kitchener stitch without too much effort.
Posted by bittenbyknittin at 4:36 PM No comments: