The Crosswalker socks are done! 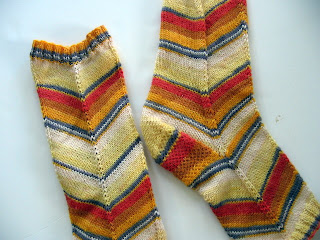 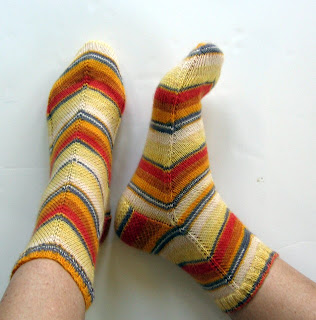 The pattern was written to allow for size customization, which was fine until I reached the heel turning. What was on my needles did not seem to match the directions. In an effort to "correct" the pattern, I must have knit and reknit that heel turn a dozen times. In the end, I returned to the directions and just let the differences stand. The toes seem a bit wonky as well. 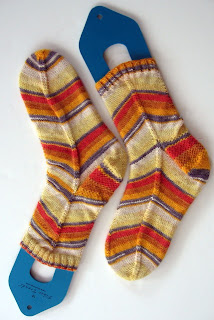 Since chevron patterns require a higher number of cast on stitches than normal, I worried about running out of yarn, so made the tops shorter than usual, which turned out to be totally unnecessary. Also, the last skein of Online I knit socks with had many splices, so I did not try to line up the stripes on this pair, but I could have, as this skein had only one splice, and that was near the end. Oh, well.

Want to see something sad? 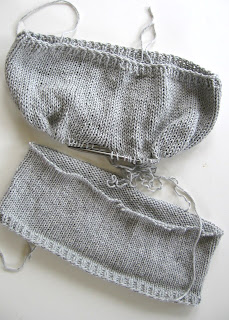 At the bottom of this pic is what remains of the Slouch, which I actually finished, only to find my gauge was WAY off. For some reason, I thought it should be four stitches per inch, but in reality it was supposed to be three. Consequently, the Slouch was too small. MUCH too small. So I am reknitting it, with larger needles. Fortunately, the yarn has virtually no memory and unknits without retaining any kink. Also, it is a very easy knit, good for boring meetings at work (which we have had lots of lately), so I don't mind the reknit.

RE UFOs: For some reason, I got the itch to finish up the February Lady Sweater. The body is done, so now I am working on the sleeves. I don't think I want to stick with the 3/4 length ones in the pattern, but they look like they flare and I'm not sure I want that, either. I plan to knit one without decreases and one with, to see which I like. Again, the lace stitch is quick and easy, so I don't mind reknitting a sleeve. Besides, my MO on handknit sweaters is I knit them at least two and sometimes three times before I am done.
Posted by bittenbyknittin at 9:21 AM

Hi Abby!! I have been reading your blog. I need to get commenting more. Anyway I love your garden! So pretty! I wish I had a yard so I am living through yours.

Your socks are amazing!!!! I have not tried that pattern yet even though it was one of the first sock patterns I wanted to knit.

Loopy Ewe - that is were I bought them. I caught an update and saw them and bought each size they had. They are Hiya Hiya. Have you tried 2 circulars or Magic Loop? When I taught my mom how to make socks dpn were impossible for her. She likes 2 circulars. I like Magic Loop. Of course now my favorites are the 9 inch circular.

Sorry to respond in the comments I couldn't email back.

Can't wait to see the FLS!!

Abby: The idea that we knit easy stuff in the summer makes sense. Maybe we'll all be ready for a challenge in the fall. I wnat to knit mittens, but I wanted to try color stranding - not easy. The Crosswalkers are beautiful - so striking.