I took (another) tumble a couple of weeks ago. Injuries include a sprained wrist, so I rested it until the swelling went down. It is still wrapped in an Ace bandage, but I find I can knit again. And type.

Not that the knitting has been going that well. I'm still slogging along on the Easy as Pie blanket. All the circles are squared, but I decided to redo the first six, slipping stitches knitwise, as it makes for a smoother fabric. The first one I picked up to redo was missing a row on color one. No problem, I'll just pick up an extra stitch for that quadrant. Things were going smoothly, until I reached the final quadrant, and instead of having 30 stitches left, there were 39. Gah!

I tossed that one aside, and several days later, after I had recovered from that disappointment, I checked the remaining five. All the circles were as they should be. I am still going to resquare them, and then I'll decide whether to completely redo the screwed up circle or reduce the blanket from 4x4 to 3x5.

Email ThisBlogThis!Share to TwitterShare to FacebookShare to Pinterest
Labels: Easy as Pie

Even though I am not knitting DK boot socks right now, I like to have a pair of socks on the needles at all times. At first, I picked out the pattern for Errant Socks (from Mason-Dixon Knitting Outside the Lines) for my next sock project, but I could not easily figure out how to modify it for my big feet. Then I decided I'd knit them for my daughter. Then I decided if I were knitting for her, I should use the yarn I purchased for making her work socks, which is black because she almost always wears black slacks at work. Then, while knitting the first toe, I realized that black yarn was not the best yarn for this pattern because of the cables; also, my eyes are old. So I switched to the Dead Simple Lace Socks pattern (from Socks from the Toe Up). But since I had already started the toe, I stayed with the more rounded one from the Errant Socks pattern. Does this make sense? 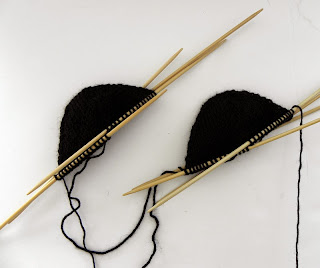 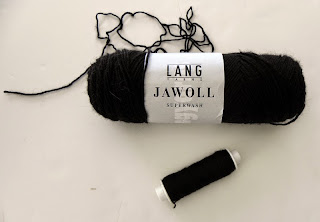 I think I have never seen this before and couldn't imagine why it was there. Turns out it is 2-ply yarn to use for reinforcing toes and heels. I hope this is not a bad omen for the yarn in general, nor the fact that this yarn has been discontinued.

FO - another pair of boot socks for me

Even though I am not officially "cold sheeping", I decided to stick to projects for which I have yarn. That means plowing through skein after skein of DK sock yarn. There is one more left, but I am saving that for travel knitting. 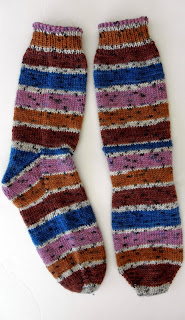 The weather has finally turned, so I don't anticipate wearing these until next winter. There is nothing like handknit wool socks to take the bite out of bitter cold.
Posted by bittenbyknittin at 2:58 PM No comments: Links to this post

Knitting on the hoof

There was some kind of knitting thing in Freimann Square a while back. The only trace that remains is a bit of finery for General "Mad" Anthony Wayne. The scarves seem fitting for the kind of winter we have had here. 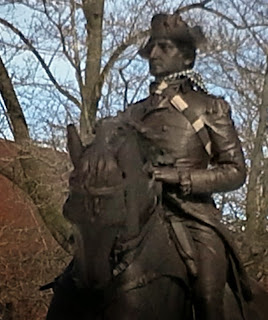 Posted by bittenbyknittin at 3:54 PM No comments: Links to this post

A week or so ago, I attended another workshop on natural dyeing, this one including indigo. I've been a little obsessed with the idea of dyeing with indigo ever since I read Kay Gardner's post on shibori, a.k.a. resistant dyeing. Not so obsessed to actually try it, but obsessed just the same. At this workshop, we worked only with yarn, but I learned how to dye with indigo, so when the itch must be scratched, I am ready (as soon as I accumulate the necessary equipment and ingredients).

In the previous fiber dyeing workshops I have attended, we mordanted the yarn before dyeing. In this one, we learned a one-pot method whereby the mordant was added to the dye pot. Either way, the yarn must be soaked beforehand. The instructor supplied one-ounce skeins, enough for each of us to have five. (That's a lot of niddy-noddying!) 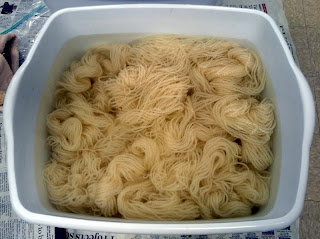 The first dye batches we did were marigold and cochineal. The former produced a golden mustard color. The latter initially resulted in coral rather than red, probably due to the fact the cochineal was wrapped in cheesecloth; when simply added to the dye bath, it produced a rich red. 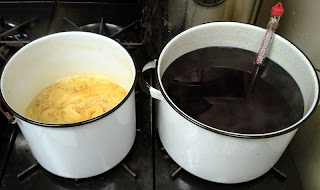 Then it was time for the indigo. We had two pots going, one for blank yarn, one for overdyeing some of the already dyed yarn. Indigo is fussy, but magical. The dye bath looks greenish yellow, as does the yarn when first pulled out. But contact with oxygen in the air quickly turns the yarn blue, right before your eyes. If you are not satisfied with the shade of blue, the yarn can go back in the pot repeatedly. 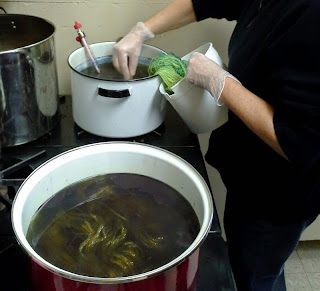 I chose to overdye the coral skein and one of the mustard ones, the latter producing a lovely green. 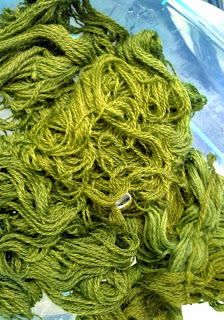 The instructor also tried dyeing with some turmeric root that is now available at the local food co-op. It produced a pale yellow that I like better than the mustard gold. 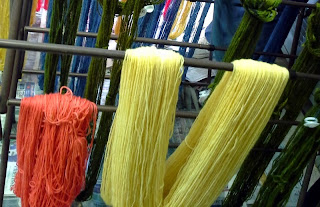 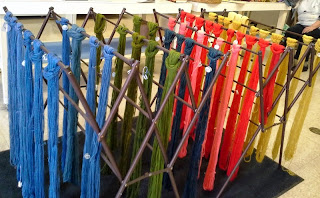 I had to skidaddle at the end of class for grandma duty. While driving the g'daughter to my house, I told her what I had been doing all morning. Of course, she wanted to dye some yarn, too. So I dug out some blank sock yarn and Kool-Aid, and we dyed our own. Being four, she did not quite get what we were doing, but I hope I am planting seeds for the future. 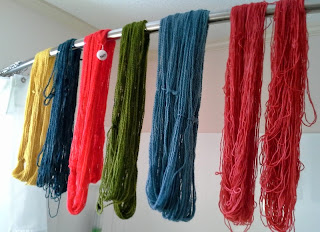 Posted by bittenbyknittin at 12:58 PM No comments: Links to this post

It will be okay

I've been marching along, working on the Easy as Pie blanket, squaring up the circles. Only four more to go! But I was beginning to worry that the squared circles would not lay flat when done. Then I got the bright idea to block one and see how it turned out.


Picking up a UFO after such a long time is problematic. I could not remember if I had already switched to the Irish cottage knitting style when I started (I had but had not yet learned to upsize the needle to make up for tighter stitches). While seeing if the pattern specified how to M1 at the points, I realized the slipped stitches were supposed to be slipped knitwise; I'm not sure I did that, but I am now. I want to do my best, but some days my best is not very good. Since this is a blanket for my 4-year-old g'daughter, and it will remain here at my house, I'm not concerned about perfection. Next time I will do better (I hope).
Posted by bittenbyknittin at 10:45 AM 1 comment: Links to this post