The seams are not the best but they were sewn and the buttons were added in time for Baby N's first birthday party. 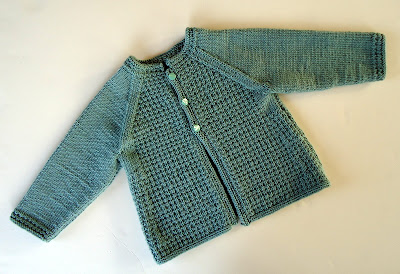 Pattern:  A-Line Cardigan, from Debbie Bliss Design It, Knit It Babies
Yarn:  Baby Cashmerino in 340026 (a greenish-grayish color)
Needles:  US3
Modifications:  Several - after all, the book title says "design it"

One obvious modification was substituting ringwood stitch for the stockinette in the body.  This greatly reduced curling.  The sleeves I kept as stockinette, but on Chrisknits advice, added a little ringwood at the cuff.  And I dropped the collar, at my daughter's suggestion.

Using a different stitch than simple stockinette was a bit of a challenge in places, like under the arms, where I reverted to stockinette to reduce bulk.  But apparently I cannot count, because the back and fronts did not line up right. 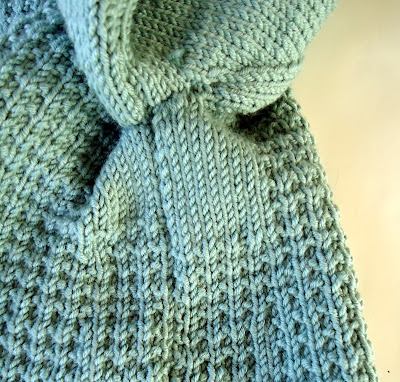 Fortunately, two wrongs make a right, so while the stockinette is not a perfect match, the back and fronts were the same length.  Whew!

I still have the pinafore to seam up and the hooded pullover to finish.  My best excuse for not having these done is I was sick last week, with an intestinal virus, that laid me so low that I could not even knit.  Feeling much better now, though, so hopefully the rest will be finished anon.
Posted by bittenbyknittin at 9:13 AM 4 comments: Links to this post

My own "grandma set"

I knit these up a while ago, but per usual, it took me forever to get a button sewn on.  I make these for my agemates as they become grandmas, and decided I should make a set for myself. 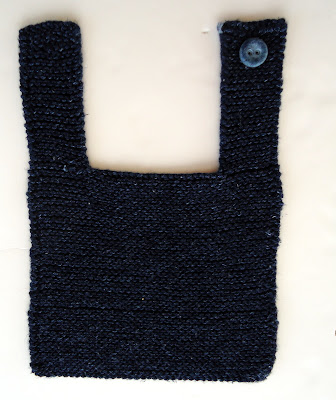 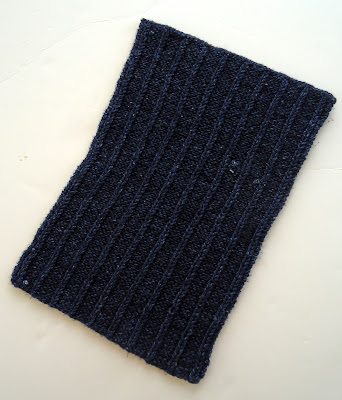 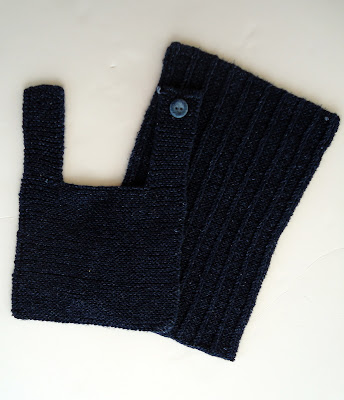 They have already been used.  The cotton is very absorbent.  And washable.  A must with babies.
Posted by bittenbyknittin at 3:12 PM 2 comments: Links to this post

Posted by bittenbyknittin at 4:59 PM No comments: Links to this post 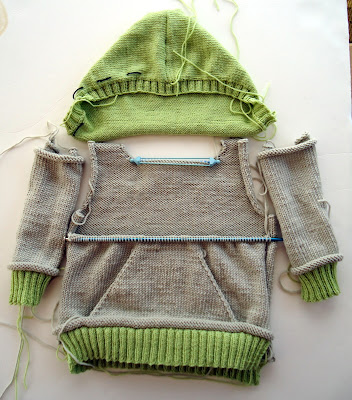 Posted by bittenbyknittin at 6:26 PM No comments: Links to this post 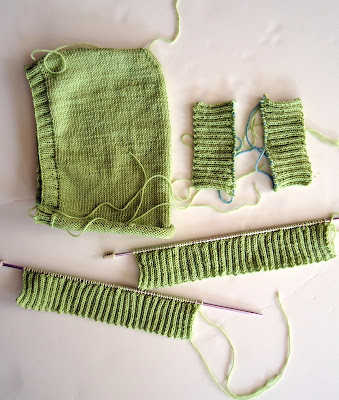 I decided Baby N needed a new winter hat.  Enter Kittyville.  The pattern was for an adult size hat, but using some arithmetic, I determined that knitting it in DK instead of worsted would yield a toddler-sized hat.  Since the width of the seed stitch border and the width of the sides below the crown were given in inches in the pattern, I guessed that a 1" border and 3" sides would be about right.  And they were.

Now, a slacker mom like me would view this hat as an opportunity to dress Baby N in a black leotard and tights, add some whiskers, and consider the costume complete for baby's first Halloween.  If anyone asks, she is Hello Kitty's evil twin.
Posted by bittenbyknittin at 8:32 PM No comments: Links to this post

On our trip to New England, I hit two yarn stores, one scheduled, one not.  First up was Charlotte's Web in Exeter, NH.  As I have done elsewhere, I asked about local yarn and learned that the hand dyers in that area frequent farmers markets and such.  Unfortunately, we would not be around for one.  I did snatch up a couple of skeins of this: 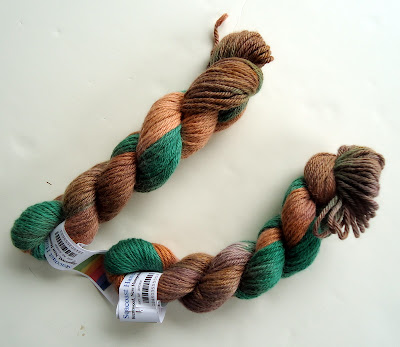 I also purchased some Noro Kureyon for the Mitered Crosses blanket I've been itching to start.  Later, at Loom with a View in Newburyport, MA, I added some Brown Sheep Lamb's Pride worsted.  And then when I got home, I could not wait to start.


As if that were not enough, I also ordered from Webs some Debbie Bliss Rialto DK and 4-ply for a hooded pullover for Baby N (who I will start calling Toddler N once she starts walking).

And I could not wait to start that project, either.

In case you are wondering about the other projects for Baby N, they are not being totally neglected.  For one thing, weaving in the ends took forever.  For another, I decided to block before assembling.

The ringwood stitch for the cardigan did resist curling except on the edges, which will be seamed together, so no worries.  The button bands lay flat, much to my relief.


The only part of the Pinafore Dress I was worried about was the hem, which suffered from some serious curling.  Dressing wires to the rescue!

My goal is to have the Baby N projects completed by her birthday later this month.  Then, on to xmas knitting!

Posted by bittenbyknittin at 8:53 AM No comments: Links to this post