I decided to stop obsessing about how best to join the squares of the Mitered Crosses blanket and just whip stitched them together, then added an attached i-cord border. 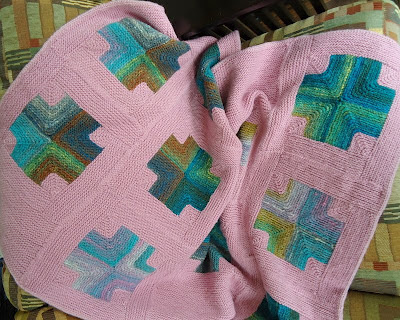 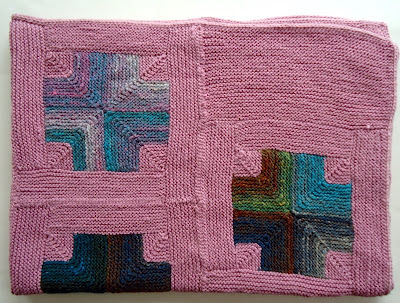 Working on this with record high temperatures (85 in March - seriously?) was a sweaty affair, but now that it has cooled down a bit, I am enjoying this lap blanket. Perfect with a cup of coffee on a cold morning.
Posted by bittenbyknittin at 3:36 PM No comments: Links to this post

If memory serves me right, I bought this Noro sock yarn on sale, the caveat being I had to take the colorway that was sent. That was okay. But I am really, really glad I am not knitting socks with this stuff. For one thing, the wool content is not superwash. For another, the yarn is spun too tightly; it twists when pulled from the skein, then sticks to itself. The thickness varies, from thick to thin (see below), in places almost thread thin - I can't imagine the fabric holding up underfoot (very punny). And it is scratchy and unyielding and stiff. 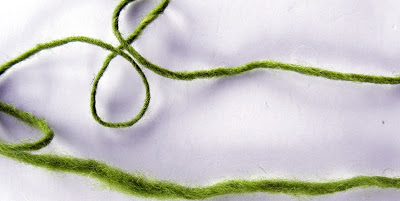 Having never used this yarn before, I made some knitting decisions based on my ignorance. Now I fear the fingerless gloves will be too small for my man hands, even though I knit the large size. I know - I should have swatched. 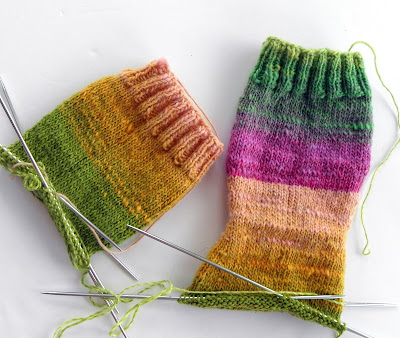 I can't even decide if I like the colorway. What do you think?
Posted by bittenbyknittin at 6:00 PM 4 comments: Links to this post

And worth the work. 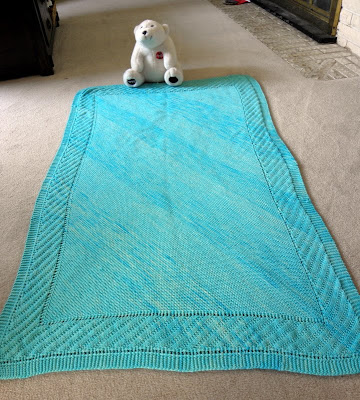 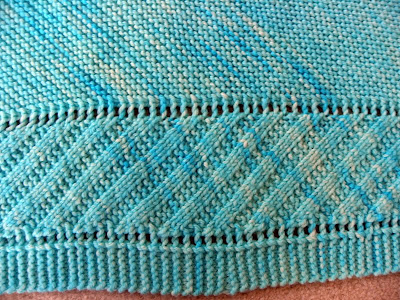 I had purchased ten skeins of yarn, used part of one to test dye and swatch, then dyed up nine for the blanket. I knit the increasing portion of the blanket until I used up three skeins (and reached 223 stitches), then knit "even" - increasing on one end of the row while decreasing on the other end - until another three skeins was used, then knit the decreasing portion, using up almost all of the final three skeins. Finished size: approximately 59"x33". 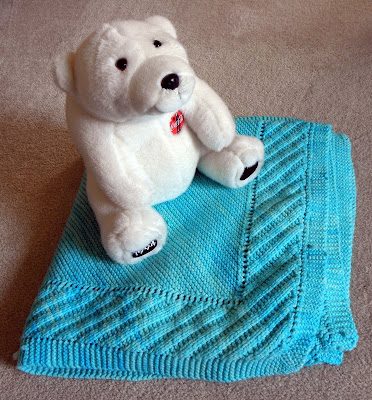 I am very pleased with the results. The pattern is interesting enough to prevent boredom, even with the elongated middle, and I love the double border and bias design. Dyeing with KoolAid produced a variegated yarn, with subtle striping because some skeins had to be redyed. After a bath, the stitches plumped up for a wonderfully cushy feel.
Posted by bittenbyknittin at 1:23 PM 4 comments: Links to this post

It won't be long now

The KoolAid-dyed Prairie Blanket is nearing completion - yay! - just in time for the end of winter. It will help keep the AC chill off my granddaughter this summer, though. 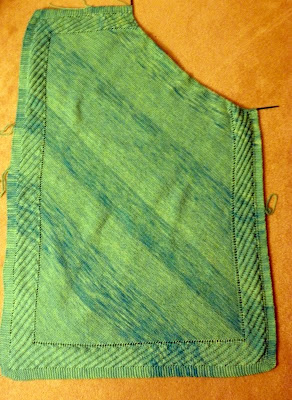 The blanket is not green and my carpet is not orange. I just need to learn how to use the camera better. The striping is not so pronounced, either, but reflects the fact I had to redye some of the yarn. I'm not sure I am cut out to be a dyer, but using KoolAid is a fun and cheap way to find out.
Posted by bittenbyknittin at 5:10 PM 1 comment: Links to this post

Sorry for the long absence. Days tied to the PC are starting to take their toll - physical therapy to the rescue, sort of. Two two-hour sessions a week are helping with stretch and strength, but pain continues. In an effort to help my right wrist (too much mousework), I have been limiting my knitting to short bursts. Consequently, the Prairie Blanket is taking forever. 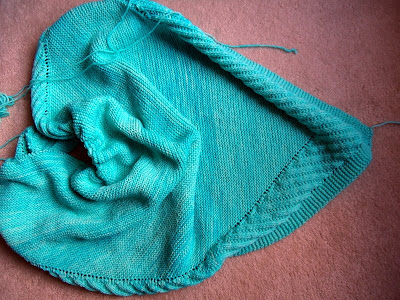 I'm about 70% done and on the downhill side - decreasing two stitches every other row - so the end is in site.

Because the blanket has become unwieldy, I had to start something more portable: 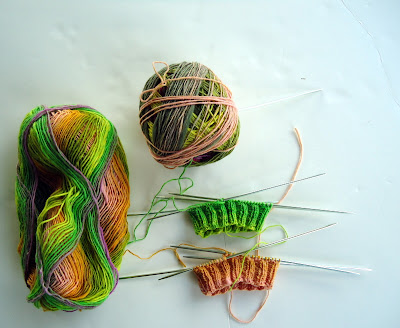 Leap! fingerless gloves, because that day my hands were cold. I plan to use these while keyboarding but I am not loving the Noro sock yarn - not superwash, very sticky, uneven, hopefully not too scratchy to wear.
Posted by bittenbyknittin at 5:14 PM 1 comment: Links to this post