My SO and I traveled to Allegan MI for the Michigan Fiber Festival a week or so ago. We drove up on Monday and stayed until Friday (at the Hotel Allegan). I took two classes and he took one. No, he is not a fiber person; he is a photographer and took the cyanotype class. Enough fiber knowledge has rubbed off me onto him, though, so he was comfortable with the chitchat.

The workshops did not start until Wednesday, so we took advantage of the lovely weather to explore the environs. One thing the state of Michigan could use is more road signs. On Tuesday we tried to find Oval Beach but never figured out where to turn. We did manage to find the beach at Saugatuck Dunes State Park, but that involved a 3/4 mile hike from the parking lot to the water. Of course, we could have done a bit of research ahead of time, but we were trying to make do with maps and directions instead of GPS or Google Maps. 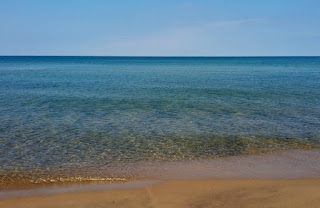 The beach itself was very narrow, looked like it had been carved out the dunes. My son told me the water level has been rising in Lake Michigan in recent years. We still enjoyed a nice swim, though. No toxic sludge. 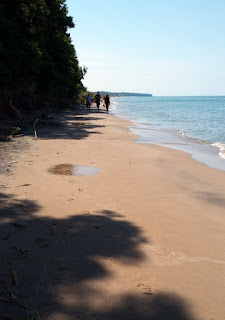 A few places we ate: Root Cafe, Grill House (where you can grill your own steak but we did not - I fail to see the lure of that), and Mug Shots Coffeehouse.

Enough tourist stuff. Onto the festival!

FB posts on the Michigan Fiber Festival's page warned of many improvements, but since we were newbies, they were mostly lost on us. I didn't know where we would eat lunch, but there was a band-fund-raising snack bar on site with perfectly adequate breakfast and lunch items, although by the end of our stay, I was getting tired of chips. If I go again, I will probably bring my own food at least part of the time, using my brand new swag gift of an insulated bag. 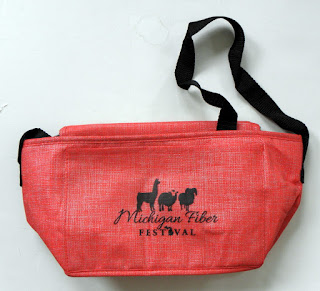 My first class was "Scour like a Boss" with teacher Mary Egbert. I attended one of her classes at PlyAway last year, so I knew she would be a good instructor. For some reason, I neglected to take any photos (boo), but the class was very helpful. I have scoured a fleece before, found it quite the ordeal, but this class provided some good information, expert tips and tricks, and got me excited to scour some more fleece. (There are three in the garage, just waiting for my attention.) Not only did Mary do an excellent job, the others in the class had helpful hints, too.

The second class, Tapestry Weaving, taught by Rosemary Morningstar, was a disappointment. The folder included some graph paper, but we did no design. There was a list of basic techniques, but the instructor did not go over them. I was hoping for expert tips and tricks to add to my book learning, but that didn't happen. HOWEVER, we each received a nifty PVC pipe loom and some weaving tools. Also, the teacher did give us each individual attention. 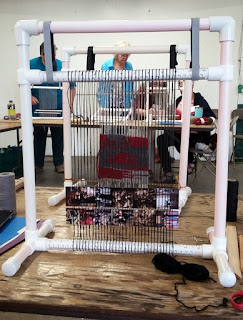 The instructor had a bunch of books for us to peruse. My local library system has several, which I just picked up the other day. Also, she recommended Rebecca Mezoff's blog, which I already follow. In fact, I am planning to treat myself to one (or more) of Rebecca's online classes this fall/winter while I recover from hip replacement surgery. 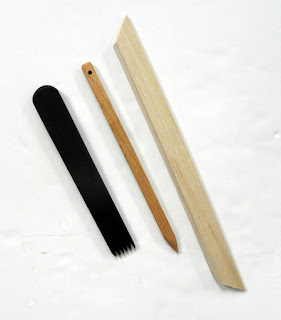 I utilized my exposure to color theory to come up with this color scheme and had plans to continue with the weaving, but a few problems cropped up after I got home, so I just cut it off the loom. My frustrations with this class got me thinking about how I would teach tapestry weaving to beginners. Someone in my weaving guild suggested I do that for one of our Super Saturdays, and now I think I just might try that. 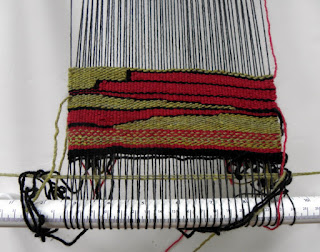 No fiber festival is complete without the opportunity to visit vendors and spend money. I was very good, didn't buy any yarn or roving or fleece, but did pick up a few items. These 14" birch DPNs are for trying with my knitting belt. I had not been able to find any longish needles for it above size US6, so I grabbed up a set of US7s and US8s. They are made by Twin Birch Products. 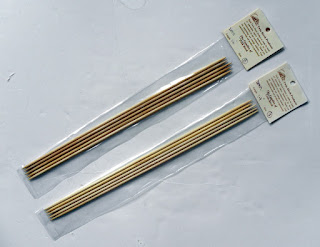 I swore I was not going to take up needle felting, BUT... after unsuccessfully trying to interest my granddaughter in a variety of crafts (she finds them too tedious), I hit the jackpot with needle felting (stab, stab, stab). Many years ago, I purchased some needle felting paraphernalia that I never used, but you know how it is with a new hobby - one never has enough tools or materials. I picked up a little needle felting kit for her (assembled by Phoenix Fiber Mill). 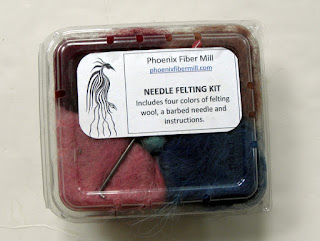 The felting needles I have are a six-pointer, a four-pointer, and a two-pointer, so I picked up several singles. (I don't know this vendor's name.) I also promised my granddaughter I would sign up for a class and transfer the knowledge to her. (The things we do for grandkids.) 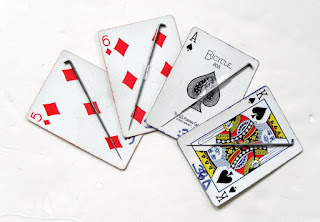 Not so long ago, I read a post by Jillian Moreno (I think) that was on the Schacht web site (I think) about using storage spools - and I can't find that post. Anyway, I got it into my head that I needed not just storage spools but a spool winder. They seemed pricey enough that I assumed they came with a mechanism for distributing the yarn across the spool. While in Allegan for the festival, we stopped at the Baker Allegan Studios (a Schacht dealer) to find out more. Alas, there is not a mechanism for distributing the yarn, so I left empty handed (in part because I was so tired and hungry that I could not make a decision but also because they were having a giant yarn sale and I didn't want to get sucked in). At the festival, I did buy some wooden spools from A Wee Bit Warped. After arriving home, I realized I already have a set of spools like these but plastic, from when I purchased a boat shuttle that doesn't work with my loom. Oh, well. Now I have lots of spools. 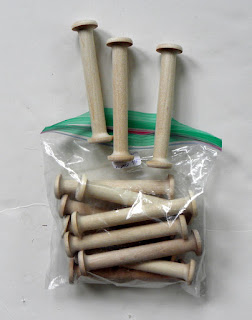 Our plan for next summer is to visit the Handweavers Guild of America Convergence in Knoxville, TN. That's assuming there are classes/workshops I want to attend. If not, I would definitely go back to Allegan. So many classes, so little time! I think we missed a lot by skipping the weekend activities, too.
Posted by bittenbyknittin at 4:52 PM 1 comment: Links to this post

Jenny Dean and Wild Color - behind the scenes

I rely heavily on Jenny Dean's book Wild Color for natural dyeing, but my results rarely match what is in the book. Now I know why: the colors shown in the book are not from actual dye samples but from swatches matched to a Pantone chart. Dean had only so much control over what went into the book, as revealed in her recent blog post (which you can find HERE).

Dean claims the second revised edition of her self-published book “Colours from Nature” more closely matches how she currently dyes, so I guess I will have to get a copy of that and see what the differences are. Also, I would like her to know that while she was not able to get purples from hollyhock blossoms, I did using black hollyhocks.

I am really glad to have come across Dean's blog post because I am supposed to make a presentation about natural dyeing to my local weavers guild next March. Now I can point my fiber friends in the right direction. Serendipity, baby!
Posted by bittenbyknittin at 5:01 PM No comments: Links to this post