My xmas gift to myself is done - one comfy pair of xmas-themed socks. Spring is trying to be sprung around here, but today I deemed the temps low enough to justify wool socks. Then I declared these my new favorites. 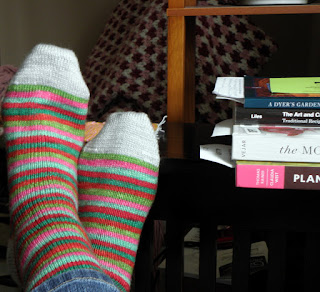 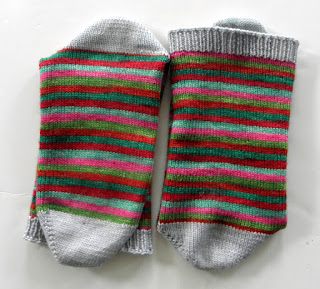 Usually, I buy sock yarn on sale and get what is available, but this xmas I decide to splurge and buy the prettiest yarn instead of the most economical. A pretty yarn does not need a fancy pattern to shine. This pattern is becoming my go-to sock pattern, as the short row heel provides a better fit than a gusseted heel. 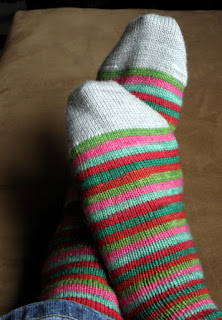 And the fit is perfect.
Posted by bittenbyknittin at 5:29 PM No comments: Links to this post

A lost week or more

The day after my trip to the Jay County Fiber Fest and Spin In, my throat caught fire. I've been virtually comatose ever since with the worst head cold I have had in years (thanks, g'daughter!) This past Monday, I finally felt well enough to take a short walk around the nabe. Tuesday I made it to yoga - the forward folds made my ears pop. Today I managed a little yardwork. I would have been more worried about the duration of this illness, but the g'daughter's pediatrician said something to my daughter about this year's cold virus being particularly long lasting. 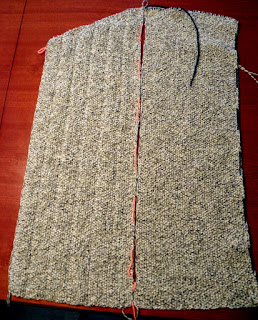 The good news is, when I wasn't binge-watching "Nurse Jackie", I was binge-knitting the poncho with no name. Despite my inability to count, the first two panels came together perfectly. 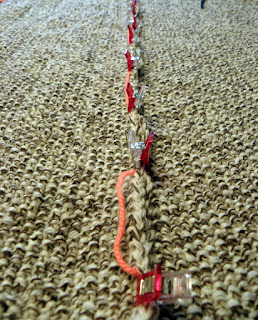 For the Best Innovation of the Year, I nominate Clover Wonder Clips. I have tried all sorts of other methods to hold two pieces of handknit fiber together for seaming, but nothing works as well as these clips. AND they are much easier to see than straight pins. 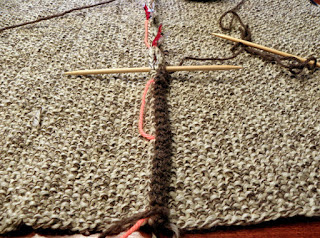 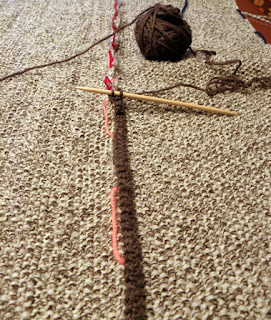 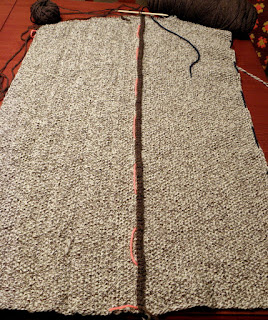 Because of my counting mishap, I am wary of getting the second side panel to line up as well as the first. Each side panel has short rows across the top, to provide some shaping. I really, really, REALLY want the poncho to be symmetrical. 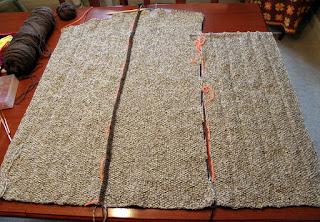 Working the i-cord and pinstriping require I sit at a table, which taxes my scoliotic back. After a certain point, these tasks cannot be avoided, though. Onward!
Posted by bittenbyknittin at 6:02 PM No comments: Links to this post

Just what I need - another hobby. 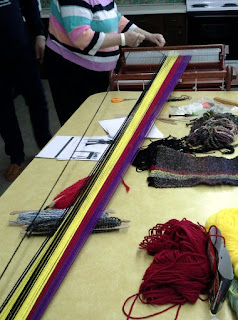 Some of you may recall that I experimented with weaving, using a toy loom and a cardboard one. That whet my appetite. 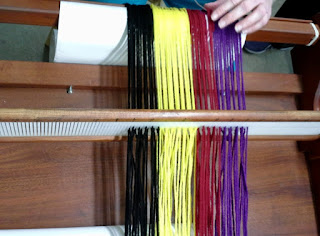 So yesterday I attended a class in weaving on a rigid heddle loom, at the Jay County Fiber Fest and Spin In. In the process, we each took a turn at the individual steps involved, including the actual weaving of fabric out of Red Heart Supersaver and Lion Brand Homespun yarns. 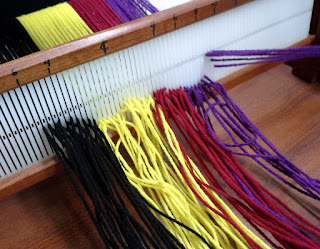 Within a relatively short amount of time, we each had a square of our very own weaving to take home. That is when it occurred to me that, rather than knitting certain large and/or tedious objects, weaving them would be faster. And, I think, result in a better finished product. 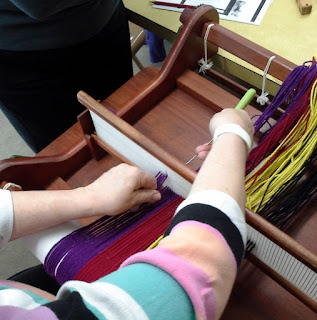 Take place mats, for example. Dissatisfied with what is available in stores, I've contemplated making my own, but the idea of knitting rectangle after rectangle dissuades me. However, one could string the warp on a loom long enough for three or four (or more?) place mats and weave them in practically no time at all, compared to how long knitting would take. 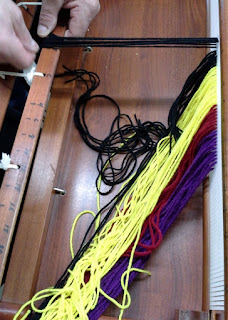 Of course, sewing would take even less time, but I sew only under duress. I'm not very patient when working with material and thread, and I'm sure whatever I managed to put together would look wonky and ragged. 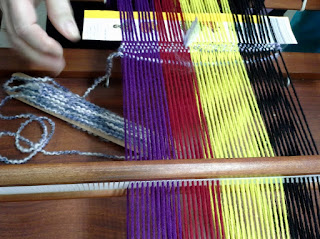 Besides place mats, I can see weaving table runners, tea towels, rag rugs, cafe curtains, even clothing and accessories. Knitwear would still be preferred for certain things - hats, mittens, sweaters, etc. - but weaving would be an excellent alternative for appropriate projects. 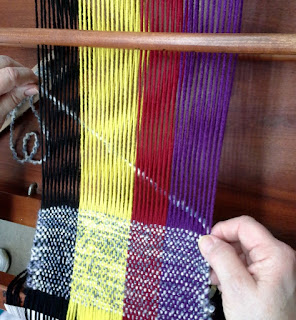 Of course, to weave, one needs a loom. Also, more experience than what I gleaned from a few hours on a Friday morning. I have some books on hold at the local library, and plan to attend the Black Swamp Spinners Guild Market Day and Fiber Fair in a couple of weeks, where I know there will be opportunities to purchase a loom. And I am not averse to planning vacations around fiber fests where there are frequently workshops. 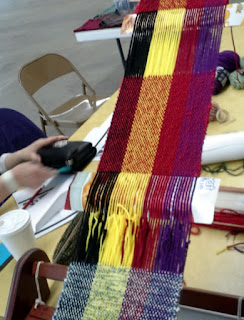 But where would I put a loom? Right now, I don't even have a dedicated space for my spinning wheel. At one point, yesterday's instructor spoke of his dream to open a weaving studio, where people could come and use one of his looms. He lives far enough away that I would not find that convenient. But I really glommed onto the idea of having a fiber studio of my own. I live by myself in a three-bedroom house, you would think there would be space. I'd have to convert the guest bedroom, which would mean getting rid of a double bed and making the rare guest sleep on a twin in the room currently reserved for my g'daughter. Or I could usurp the g'daughter's room, merging her crafts into mine. It's not like she lives here (although sometimes it seems so). 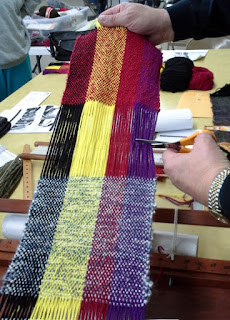 Toward that end, I started rearranging the yarn and roving stash. O.M.G. Where did all that fiber come from?!? I can't spin or knit fast enough to make a dent in it. 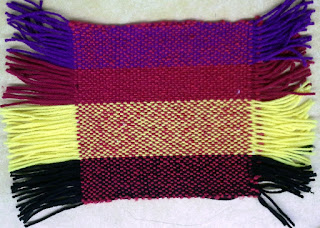 But maybe I could bust that stash with weaving?
Posted by bittenbyknittin at 4:27 PM No comments: Links to this post

This has not been a good winter for wearing woolens, but yesterday was cold and snowy. I wore an orange (store bought) sweater I had forgotten I owned, with a pair of orange-ish socks I knit specifically to wear with this sweater. (I don't have many orange clothes.) I really like the socks because of the gradient colors (although the yarn was a bitch to knit) and admired them all day. 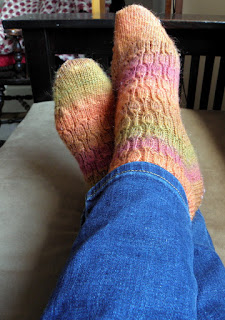 Which brings me to the topic of favorite handknits. Do you have any? There are a couple of projects I am especially proud of. One is the Fibonacci Cardi-vest I knit for my SO. Another is the Easy as Pi(e) blanket. Both were big projects that involved learning new techniques. I get that zing of accomplishment whenever I see them.

I also feel warm fuzzies whenever I see a gifted handknit in use. These projects were knit with love, but I also like hearing how my daughter receives compliments on her slouchy hat. On the other hand, my SO's grandson has managed to lose both the hats I have knit him, so he is off the handknit gift list.