Or should I say toe-up is very trying? These are the anklets I promised myself in a previous posting. Since the TOFUtsies yarn is not-quite-half-used-up, toe-up (and my trusty scale) seemed the solution to knowing when to stop sock #1 and start sock #2. But I had an awful time getting started.

My original plan was to follow the Ann Norling basic sock pattern but knit up instead of down. Sounds easy. But how to begin? After struggling with several methods from several sources, I settled on one of the many so-called "easy toe" directions, this one from Sensational Knitted Socks. But, for some reason, I couldn't get the provisional cast on to unzip. Several more sources later, I came across a provisional cast on from another set of "easy toe" directions, in this knitty article, where one crochets a chain, then knits into the backs of the stitches. Success!

Now I had my little rectangle of knitting to turn into a sock toe. Still under the delusion I could follow the basic sock pattern, I had cast on 20 stitches, which meant I had 40 stitches on two needles, which turned into 48 stitches by the time I added a third needle and had picked up stitches on the sides of the rectangle. Since the basic sock pattern starts with 64 stitches, I added 4 stitches every other round until I reached 64. 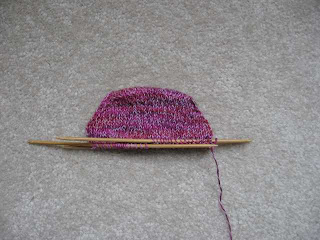 Hmmm. This toe looks really boxy. Oh, well, I said to myself, maybe this is one of the differences between toe-up and cuff-down socks. But before I continued, I took a gander at the heel instructions in SKS. The toe-up sock directions are combined with 5-stitch pattern directions, so the expectation is one will have the number of stitches on the needles suitable for 5-stitch patterns. I am knitting plain stockinette; did I want to recalculate the values in the heel instructions to work with my 64 stitches? Definitely not. So I increased my stitch count to 70.

(An aside: I hate M1, aka "make 1". For some reason, I find it incredibly awkward to execute and I end up kind of twirling the needles around each other, seeking a purchase for completing the stitch. And usually I leave a little hole behind, but these M1's look pretty good. But I still hate doing them.)

(Another aside: While discussing pet peeves, I will mention that I am becoming more and more disenchanted with bamboo needles. Instead of growing smoother with time, they seem to be getting brittle and splintery. The obvious solution is to sand the roughness away, but eventually that will change their size, won't it? And the yarn doesn't move smoothly over the needle surface. These needles may be passed on to another knitter who can appreciate their quirks more than I can.) 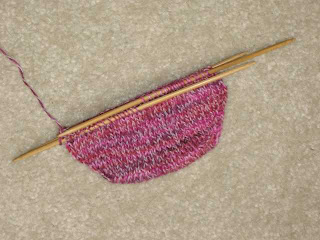 So, now I'm merrily knitting around the foot of the sock, but that boxy toe bothers me. Looking at the SKS instructions, I now see that I should have cast on 14 stitches, not 20. Maybe I should have just started with the SKS pattern to begin with. But am I going to start over? I don't think so. I wear Earth shoes, which have square toe boxes, so I'm thinking I will just stick with what I have. It will add another variable to the experiment that is called knitting.
Posted by bittenbyknittin at 9:07 AM No comments: Links to this post

At the last Women's Weekend, almost everyone was knitting, but at this one I knit alone. Maybe it was the 90 degree heat that put off the others, and I have to admit that it is difficult to knit once one's hands get sweaty, but by then I was almost done, so I had to finish. More details here. 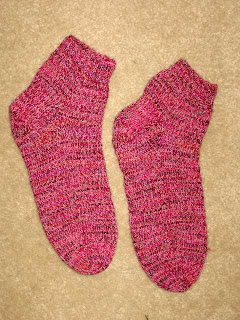 These socks were meant to be anklets, but they are actually somewhere between an anklet and a footie. I plan to make myself a pair, on needle size US2, and think I might increase the top by an inch or so.

I don't think I ever expanded my New Year's Resolution (to do something fun each month) beyond May, so here is an update:

June: Another Women's Weekend. See January for details on what this is about.

July: Having fun this month may be unachievable because my department at work will be training our replacements. We won't necessarily lose our jobs; rather, we are being freed to find positions elsewhere, either within the company or without.

August: This one is easy because my daughter is getting married!

September: Tentatively scheduling a vacation for this month.

Ok. I checked the notes that I jotted down two months ago that said we would meet in June but not July or August. Last week while I was at the library, I asked whether the knitting group would meet, and they said yes. I worked up some blanket squares, leaving one in an almost-done state, so I would have something to work on. I packed up the preemie caps. I rearranged my schedule to accommodate the meeting. I even took a shower and arrived on time. But no "One Stitch at a Time" meeting.

This always happens to me. When I first moved to The Fort, I tried to make new friends by enrolling in classes, attending meetings, going to events, and 9 times out of 10, the class/meeting/event would be cancelled. Or, if it weren't cancelled, I'd be the youngest person there, the next youngest being around 70, or (as in the case with a writers conference I attended last month) the only person there (at least the instructor showed up). Something in The Universe wants to keep me out of group situations, for either my protection or theirs.

But this time I thought it was safe. The group seemed large enough and stable enough to withstand my bad group karma, and knitters are a sturdy bunch. But I guess it was just not meant to be.

Think I will go play with my bunny. 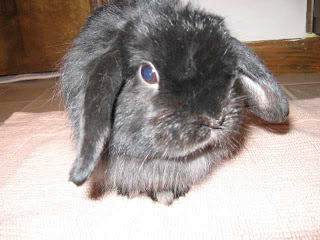 Every Project Is an Experiment

That's the basic equation for these socks. Using the Ann Norling pattern from the basic sock class, I dropped a needle size for a better fit (pattern recommended US3, instructor told us to use US2, and now I am trying US1), but the SWTC TOFUtsies yarn is less stretchy than the Online yarn I used before, so I wasn't sure how these would turn out. I thought the entire sock was going to be too small, but my daughter declared the fit to be just about perfect (except for the ribbing, which seems a bit loose, but she claims it doesn't matter because these are anklets). So it's on to anklet #2. 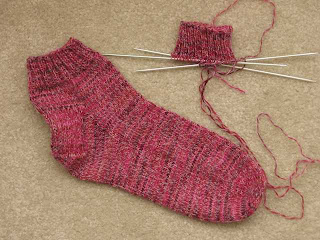 A big advantage to knitting anklets is it takes about half the time as regular socks. This first sock weighed only 20 g., so I'm hoping to get two pairs from one skein, another advantage to anklets. The second pair will be for me (Ha! I've said that before), and I plan to do the ribbing on size US1 but the rest on US2, to see how that works out. Another experiment!
Posted by bittenbyknittin at 8:17 AM 2 comments: Links to this post

Last month I forgot to attend the "One Stitch at a Time" meeting. I have a list of excuses - just back from a writer's workshop, taking a week off to work in my yard, expecting my son to visit, etc. - but really, I just plain forgot. But I don't want to forget this month, because we are not meeting in July and August and I want to turn in what I have managed to get done.

I'm not very good on group projects and have suffered a lot of angst over the blanket squares, but here are four finished preemie caps. 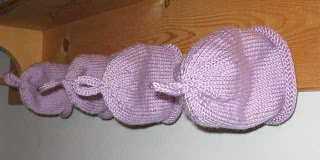 Three are in the smallest size and one in the next-to-smallest size for the pattern, which is free from Lion Brand. BTW, I used Crystal Palace bamboo needles designated as US3 but in reality are more like US3.5 (if there is such a thing). The i-cord loop on top is my addition.
Posted by bittenbyknittin at 5:59 PM 2 comments: Links to this post

I finished something! More dishcloths! I may have trouble seaming garter stitch, turning hells heels, and knitting lace, but by God, I can mattress stitch stockinette! Well, more or less. I stitched these up and wove in the ends over my lunch hour at work. Not a perfect job, but perfectly good enough for dishcloths. 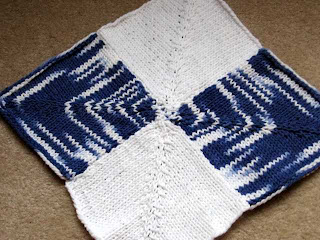 These were based on the Mitered Square Blanket pattern in Mason-Dixon Knitting. I used Lion Brand Lion Cotton. The variegated yarn is "Wedgwood", the blue is "Periwinkle", and the white is "White". Originally, I planned to make one dishcloth, combining the Wedgwood and Periwinkle squares, but that didn't look so hot. So then I decided to make White squares for the Wedgwood, which meant I now had 1.5 dishcloths. Naturally, I had to make two more squares for the Periwinkle, so I striped the Periwinkle and White. 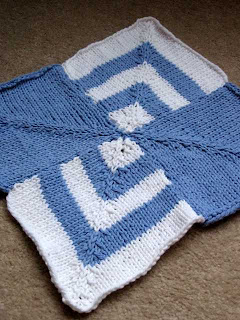 These are for my daughter, so everytime she washes dishes, she will think of me.

Posted by bittenbyknittin at 9:27 PM 2 comments: Links to this post

With the recent drop in temperatures, I decided to wear my new sucks socks with Birkenstocks, and I discovered that, not only do the socks look huge, they are huge. Even after a trip through the washer and dryer, by the end of the day, they were scrunched down around my ankles. I'm half tempted to frog them, but I hate to mangle the yarn any more than I already have. Maybe they will fit my son's size 13 feet. Or maybe I will develop edema. If neither of those ideas work, the yarn may become a shawl.

And then there is the lacy top. My plan to thread a lifeline every 12 rows was defeated by a major snafu in - you guessed it - row 12. I set it aside to marinate, but I think I will have to frog. I keep putting it off.

And then there is the mango baby hoodie whose construction has not progressed beyond that first sleeve, which I did over, and it does look better, but I'm not quite satisfied.

And then there are the patches I've been knitting for a charity blanket, the patches I can't knit to gauge, no matter how small the needles, the patches from yarn that is not from the same dye lot. The group is meeting next week. At least I have a few preemie caps to contribute.

And then today I read several blogs, the writers of which all seemed to be at BEA. It was like reading about a party I was not invited to, a party I would very much like to be invited to. Who am I kidding? I am dying to be invited to that kind of party! The only catch is you have to actually write a book and be getting it published to be invited. Two giant hurdles. Even though last week my fortune cookie fortune said, "You will become an accomplished writer," I can barely keep this blog up-to-date.

On the plus side, I started another pair of socks (why do I persist?!?), anklets out of SWTC TOFUtsies. I originally intended to use their bamboo yarn and knitted up a swatch, but it was the previous incarnation of bamboo yarn (it has since been redesigned) and it seems more conducive to exfoliating washcloths than socks. But I tell ya, anklets are definitely the way to go: 16 rows of ribbing, 16 rows of stockinette, and you're already into the heel.
Posted by bittenbyknittin at 7:36 PM No comments: Links to this post