I am discovering that I really enjoy weaving rugs. I'm getting the hang of warping the loom and once that is done, the weaving itself goes quickly. This time I twisted the fringe with my new fringe twister; it seems like that took as long as weaving the whole rug. 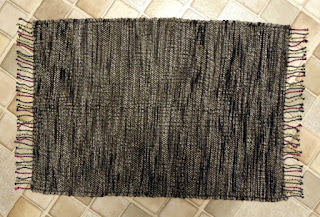 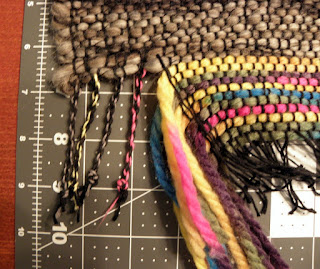 When my SO saw the rug pre-fringe, he thought the (colorful, acrylic) scrap yarn was part of the design and he liked it, which surprised me (unless he was just being polite). I removed the scrap yarn, but augmented the fringe with some gray, pink, and yellow as a compromise. This was the first time I used my new fringe twister, so I relied on instructions found here (more or less). 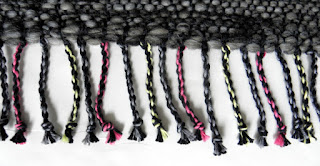 I learned that four inches of fringe is reduced to about two inches once it is twisted and tied. I will keep that in mind in the future.
Posted by bittenbyknittin at 8:52 PM 2 comments: Links to this post

Blurry pictures but a great experience

A couple of weeks ago, my SO and I visited the Columbus IN/Nashville IN area. We had been to Columbus before, liked the town, wanted to see a bit more of it. One stop was Shabby Sheep and Ewe, where I made a few purchases. Gotta help the local economy AND the local yarn stores.

Nashville was a bit of a bust. It used to be an artists colony, now is definitely more of a tourist trap; although much of what is for sale is handmade, it's more crafty than arty. However, we did find the Clay Purl and the Brown County Weavery. The former had moved, so the address in the visitors bureau directory was incorrect; I had to call them to get their location. The weavery must be new, as it was not in the directory at all; we just happened to stumble upon it. Needless to say, more money was spent.

By then I had reached my usual self-imposed limit on fiber expenditures. That cap was blown away after visiting Homestead Weaving Studio. In October, there is a studio tour. I had picked up a map for it, checked for weaving studios, and called one that was near the Story Inn ("One inconvenient location since 1861"), where we had eaten lunch the day before. The weaver, Chris Gustin, sounded reluctant but she let us stop by, and we made it worth her while. 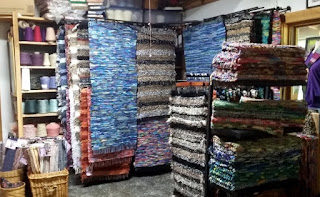 Chris' husband Bob initially greeted us and let us in the studio. My-oh-my. Chris is a production weaver, creating two or three rugs or shawls a day, with October being her big revenue month, although there are online sales as well. She has 25 looms she keeps busy, some of them set up for classes. 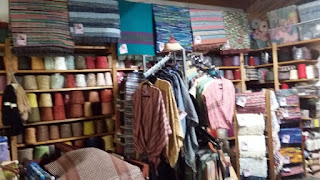 Bob builds "nail looms" using cotter pins instead of nails; a couple of those found their way home with me. Much of the material Chris weaves with is recycled, with the exception of all those spools of warp yarn. It looks disorganized, but she knows which shelves hold which threads. 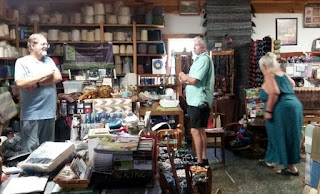 The two of them have a repertoire of stories, including one about Raymond Burr and his sheep breeding efforts. Chris purchased a lot of roving from his estate; one 8-oz package remains. 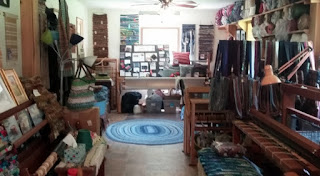 Chris and Bob were generous with their time and expertise. Visiting this studio was one of the highlights of our trip, the other being the Story Inn. Sometimes you have to get off the beaten track to find the gems.
Posted by bittenbyknittin at 12:20 PM No comments: Links to this post

Email ThisBlogThis!Share to TwitterShare to FacebookShare to Pinterest
Labels: travels

I finished weaving a tapestry sampler a while ago (June 5, to be exact), but I had to return the book the design came from to the library (after renewing it five times). Then someone else checked it out, so I ended up purchasing a used copy (Rigid Heddle Weaving, by Karen Swanson). I wanted to make sure I had the sections labeled correctly before posting, hence the delay.

The book is actually about how to use a rigid heddle with a backstrap loom, but I decided I could make the sampler on my Ashford rigid heddle loom. That was true, more or less, but per usual, I learned a lot in the process. For one thing, I had the yarn specified in the pattern, but not the 5-dent heddle, so I warped up my 7.5-dent one with 8/4 carpet warp. Alas, that did not work well with the rug yarn. While contemplating how to resolve that issue, Liz Gipson gave me the idea of using worsted weight yarn instead. I have a lot of naturally dyed Lamb's Pride worsted, in colors I don't wear, so that fit the bill perfectly.


Tapestry weaving is weft-faced, so the weft must be beaten down to cover the warp. This cannot be done with the heddle. Initially, I used the shuttle from my inkle loom because it has a beveled edge, but was too short to do the entire width of the piece. Eventually I ordered some swords from the Woolery, which made things go much easier.


Another problem I encountered was losing the shed as the amount of fabric on the front beam grew. I tried compensating for that by adding weights to the warp, but that didn't really help. Toward the end, it was a real struggle to insert the weft. Maintaining even selvages while learning something new is a challenge, too, leading me to reweave a significant amount.


The darker yarn was dyed with walnut. The lighter yarn is pomegranate, pomegranate and tumeric, and tumeric. Some of the color changes between the light colors were a bit abrupt, but don't show a lot. Or look like part of the plan.

Despite how slow the weaving went, I really enjoyed tapestry weaving. It's much more interesting than simple weaving. My plan is to do more of it.
Posted by bittenbyknittin at 5:57 PM 1 comment: Links to this post