Do I need a tetanus shot?

I spent part of this holiday weekend at a friend's house, where I knit upon the couch, bag of yarns and sticks at my side.  One of the sticks in the bag was a US3 13-inch straight that I planned to use to cast on a baby hat.  While uncrossing and recrossing my legs, I managed to impale my right calf on said needle, which was poking (ha) out of the bag, point up.  And by "impale" I mean the needle was stuck far enough into my leg to hang there by itself.  Too embarrassed to admit what I had done, I surreptitiously pulled the needle out and slunk off to the bathroom to cleanse the wound, which fortunately did not bleed much.  Remember this story if the TSA confiscates your knitting needles next time you fly; they really can be lethal.

Now, a pet peeve:  splices.  For one baby blanket, I purchased four skeins of Lorna's Laces, two of which were perfect.  While winding the other two into balls, I came across splice after splice after splice.  Some of the splices were across all three plies, but some were in just one ply.  Either way, I snipped them out and restarted winding.  By the time I finished, instead of two balls of yarn, I had eight. 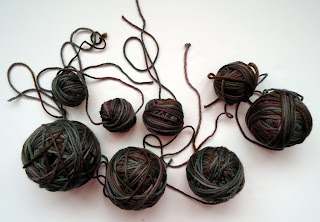 I don't know much about the economies of waste in the yarn business, but when I am paying $20 per skein, I really, really, really would like there to be a minimum number of splices.  Like zero.
Posted by bittenbyknittin at 5:13 PM 2 comments: Links to this post

Another FO!  One of those projects that just kind of gets started, then when it is 90% done, bogs down. 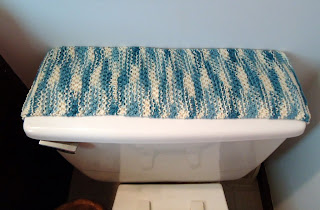 All I wanted to do was replace the hand towel on the back of the toilet with something a little bit nicer.  Only by leaving the project by my bedside and committing to four rows a night did this get done. 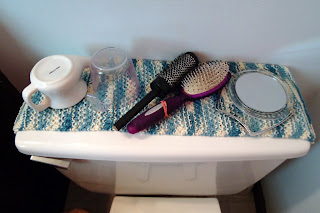 Now, time for grandbaby knitting!
Posted by bittenbyknittin at 9:26 PM No comments: Links to this post

The socks are done!

After all my whining about knitting toe up, the pinkish socks are finally finished.  Due to a combination of factors, these took over a month and a half to knit. 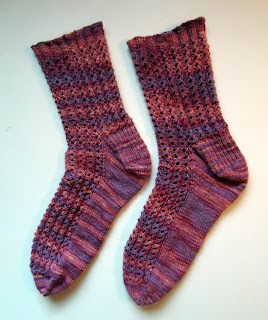 Pattern:  Lacy Ribs Socks, from Socks from the Toe Up 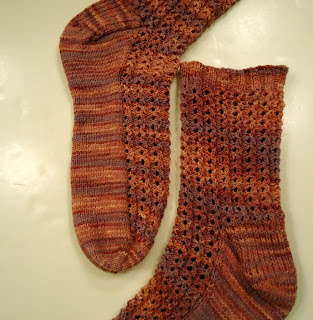 Neither of these photos do justice to the lovely colorway with its subtle pinks, yellows, and lavenders - it's a gray rainy day here.  As much as I love the color, I'm not sold on the yarn, which is a blend of wool and Tencel.  Not very soft or elastic, and it is supposed to be hand washed.  The socks are still damp from blocking, so I haven't worn them yet.  We'll see how they feel at a future date.  Right now, I am just glad to be through with them.
Posted by bittenbyknittin at 7:20 PM 1 comment: Links to this post

I did not knit as much as I had intended during my road trip because, well, I was on the road.  A lot.  I am losing hope that these socks will ever be done. 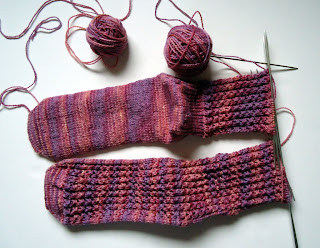 With top down socks, by the time you reach the foot, things are sailing along because half the stitches are plain old stockinette.  But with toe up socks, you are knitting the pattern all around the leg, which is really bogging me down.  And by now, the pattern is rather boring.  I sit down and do a four-row pattern repeat, and then I want to do something else.

Absolutely no progress was made on the baby blanket during the road trip, but here it is, in its WIP glory. 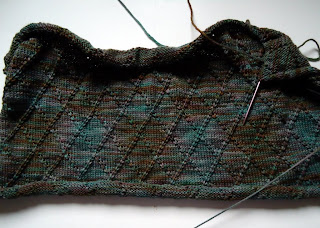 I am taking today off to recover from my travels, and if the promised rains materialize, they will keep me out of the garden, so maybe, just maybe, I will make some progress on one or the other of these today.  Or I might watch a movie.

Too bad the LYS's are closed on Monday, or I could go yarn shopping for baby knitting.  I purchased the following and now just need some yarn to get going on something new:

Still not much new

I finally made it in for a deep-tissue massage and now my shoulders are feeling much better, so I've been knitting more.  I am finally past the heels of those pinkish socks I've been working on for over a month, and baby blanket number two is about halfway done.  (Baby blanket number one is still in pieces.)  No progress on the back-o'-the-toilet thing - that is one of the culprits that screwed up my shoulders in the first place - but it is in the homestretch if I ever decide to run with it again.

BUT I have a road trip coming up.  Unfortunately, I will be doing the driving, so no knitting then, but I do expect to hit the needles as much as possible while taking a break from the yard and garden.
Posted by bittenbyknittin at 8:16 PM 3 comments: Links to this post

Still getting used to my camera (which, BTW, is a Sony Cyber-shot DSC-W330).  There is not much knitting to photograph, anyway.  I have been so busy at work that my lunchtime knitting has fallen by the wayside, and at home, the yard and garden call to me relentlessly.  I am still plugging away, but much more slowly.

Anyway, I had a new Ravelry experience recently:  someone asked to purchase some of my yarn.  I had a half-dozen skeins of Classic Elite Four Seasons (now discontinued) left over from Sitcom Chic, with no prospects for it in sight.  (Besides, one fuschia garment per wardrobe is plenty.)  The purchaser had some of her own Four Seasons, but not enough for her planned project.  Incredibly, mine matched her dye lot.  She offered a fair price, so now I have a few more bucks in my PayPal account and she has the yarn.  Win-win!

I forget where I read about brioche knitting, but I checked Knitting Brioche

out of the local library.  It looks like fun, but it also looks challenging and I am not quite up for a new challenge right now.  In fact, I have a lot of challenges, like spinning and dyeing, to name two, that I am not facing.  There are simply not enough hours in the day.