What sometimes happens when I am knitting/weaving/spinning, I hit a snag of one sort or another. Sometimes I need more yarn, sometimes I need more knowledge, sometimes I am just disappointed in how whatever I am working on is turning out. The latter is the worst because then I am torn between just finishing it anyway or permanently abandoning the project. Any suggestions?

Knitting: Finished the socks; can't start another pair until I find some matching yarn in a solid color for the heels and toes. Started an L-Bag, using some of my naturally dyed yarn (walnut, onion skins, henna).
Needle felting: still working on the fairy house.
Spinning: Plied the remnants from the gradient project, just to empty out the bobbins. 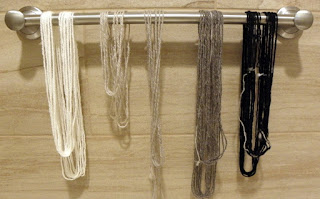 Tomorrow I am dropping by Simply Socks to find some yarn for heels and toes. The bag I am weaving is held up because I need more of the dark brown but can't find the ball band with the colorway information. I don't usually throw ball bands away but this one is definitely MIA.
Posted by bittenbyknittin at 6:43 PM 2 comments: Links to this post 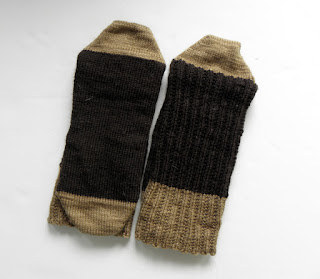 Pattern: Short-row toe and heel basic socks, by Wendy D. Johnson, and garter rib, by Charlene Schurch.
Yarn: S.R. Kertzer On Your Toes 4 Ply with Aloe Vera, in brown, and unknown base yarn, hand dyed with black walnut, by Little Shop of Spinning
Needles: US1
Modifications: not really 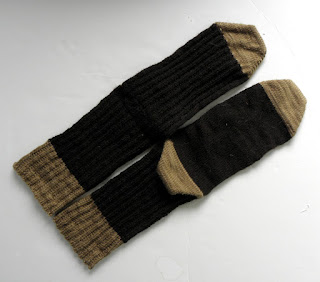 Ordinarily, I do not make the cuffs so long, but I ran out of the dark brown yarn. Usually I switch to a 1x1 or 2x2 ribbing for the cuff, but this time just continued the garter rib. I hope they are tight enough to keep the socks up. If not, I can easily reknit the cuffs, an advantage of toe-up socks. 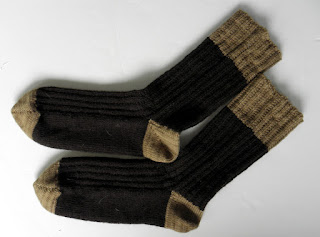 Now if only the weather would cool off enough for wearing wool!
Posted by bittenbyknittin at 11:12 AM No comments: Links to this post

Email ThisBlogThis!Share to TwitterShare to FacebookShare to Pinterest
Labels: socks, toe up

Still not much progress

Cleaning for visitors, then visitors took up a goodly portion of this week, plus errands and some surgery prep. I don't always get a flu shot, tried to schedule one at my GP's office but the phone nurse bent over backwards to keep me away (I'm assuming they are very busy this time of year), so I went to Walgreens. Then my SO and I went in search of HUGE jammy bottoms for me to lounge around in while recovering (they have to be loose enough to go over bandaging and support hose). Needing a hip replacement has made me more empathetic toward those with chronic pain.

Spinning: got into a tiff with one of my spinning wheels while plying the slubby yarn, so I started spinning more skinny singles but with silk.
Knitting: STILL need to finish up Veronika; almost done with the socks.
Needle felting: Attended another needle felting workshop and have continued to work on the project from that.

At one point, my SO and I discussed attending the Handweavers Guild of America Convergence in Knoxville next summer, but quite frankly, I am burnt out on workshops. This year I attended one at Jay County, two at the Michigan Fiber Festival, two from the local parks department, and a two-day one with the local weaving guild which caused me to miss one with the local spinning guild. Instead, we are thinking of vising Storm King Art Center. My guy happily follows me to fiber fests (he's a photographer, so keeps plenty busy on his own); I decided we need to go somewhere important to him this time.
Posted by bittenbyknittin at 5:41 PM 1 comment: Links to this post

Another day, another workshop

Saturday I attended yet another workshop in needle felting. Same instructor, same fiber art, yet I still learned something new. The class project was a bit ambitious for 3.5 hours - I have a long way to go - but am confident about what I am doing. I will post more details about the Fairy House Lamp once I'm done. 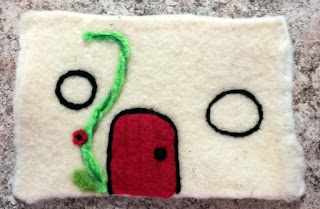 I'm trying to get somewhat ready for some visitors Tuesday - vacuum, dust, etc. - yet today just HAD to take a nap. I was knitting on the socks and literally dozing off between stitches. Has that happened to any of you?
Posted by bittenbyknittin at 6:10 PM No comments: Links to this post

Not much progress report

This week has been a bit of a struggle fiberwise (and other wise). My SO came over and helped me with some yardwork (including dog-proofing the compost bin), I had to visit a physical therapist as a prelude to hip replacement surgery (that is scheduled in December), a while back Beau the Feline Destroyer of All Things Nice ruined the caned bottoms of ALL the dining room chairs (you couldn't sit on them without getting splinters in your butt) and I finally got them recovered this week, the contractors finished the updates to the bathrooms, etc. Always something going on.

Spinning: plied some of the skinny single with the slubby yarn. It is really soft!
Knitting: still need to finish up Veronika; into the cuffs on the socks.
Weaving: worked a bit on my piece from the dimensional weaving workshop.
Needle felting: finished up the pumpkin from the previous workshop - and taking another needle felting workshop tomorrow!

I follow Rebecca Mezoff, who is an accomplished tapestry weaver. She has a lot of Youtube vids including one that contains excellent advice (which she attributes to Tommye Scanlin, another accomplished weaver): Weave every darn day. I spin almost every day, I knit almost every day, I don't care if I needle felt every day but I think I will needle felt a sign that says, WEAVE EVERY DAY because that is something I don't do but wish I did. Or maybe I should tapestry weave the sign! Maybe then it would sink in.
Posted by bittenbyknittin at 3:56 PM No comments: Links to this post

Last Friday and Saturday I spent six hours a day weaving. If I did that every day, I would get a LOT done! I would also be stiff as a board. Even though we stretched periodically, I felt nearly crippled by the end, happy to come home and lay on the floor for a while.

The instructor was Martina Celerin (web site may be found HERE). Almost all the materials she uses are scavenged from here, there, and everywhere, including Goodwill by the Pound. Consequently, most of the fiber was acrylic yarn, not my favorite material to work with. But there were also beads, shells, crinoids, feather boas, leather strips, etc. 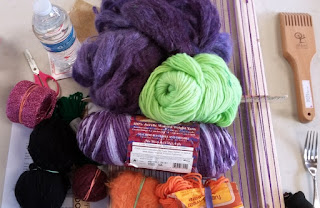 No experience was necessary to take this class. You also did not need to bring or buy any equipment, as Martina supplied looms (built from scrap lumber), shuttles and pick-up sticks (made from yard sticks), and beaters (real metal forks). At the end of the class, I did purchase my equipment, partly because I was not finished but also because I seem to have become a collector of frame looms. 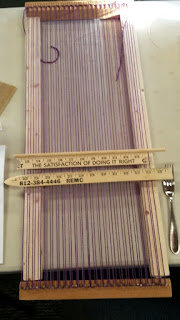 I came with an idea and some of my own materials, but the narrow loom precluded following that path. The second day we discovered a feature of these looms: because the nails run all the way to the edge, two looms may be clamped together, to form a wider one. 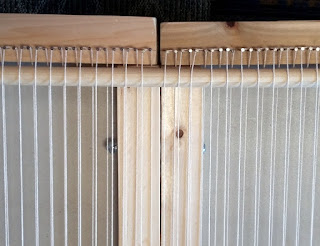 All it takes is a drill, a couple of nuts, and two long bolts. 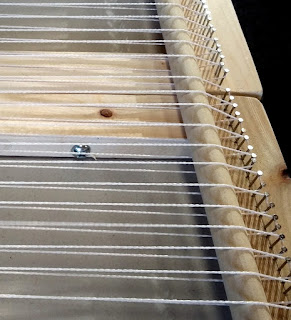 While everyone else seemed to be creating pretty, 3-D pictures, I somehow ended up with monsters (ala Make It Mighty Ugly, by Kim P. Werker). The mummy was supposed to be a skeleton (everyone else was making trees and/or branches), but once I started wrapping, I just kept wrapping until a mummy appeared. I needle felted the pumpkin from some roving I brought, now that I know how to do that from a PREVIOUS WORKSHOP. (I wish I had used candy corn colors for the borders.) 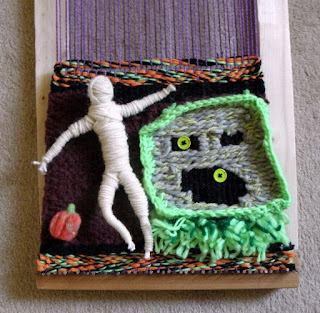 At one point, while waiting on the instructor to cover the next technique, I started weaving from the other end of the loom, creating a gradient sunrise. 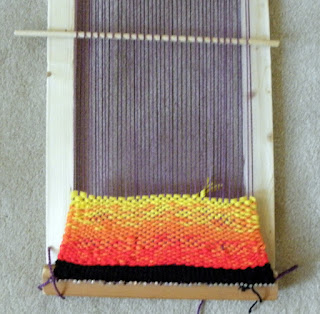 Since we started weaving right next to the nails, one end of the piece(s) will naturally have no fringe. And right now I can't recall the details about the other end except that each pair of warp threads needs to be tied together. Ends on the back of the piece can be tacked down with a glue gun. 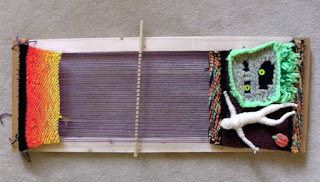 I'm not going to start weaving like Martina, but I'm sure the techniques I learned will inform my own weaving. It's easy to get bogged down with weaving rules when there really aren't any. Or maybe a better way of saying that is, Learn the rules, then break them.
Posted by bittenbyknittin at 3:31 PM 1 comment: Links to this post

Sorry I am late in my weekly status report, but I have what I consider a good excuse: I was in a "dimensional weaving" workshop Friday and today. More on that later. Because of this workshop, I missed a local workshop on "bucket" dyeing. So many workshops, so little time!

Knitting: No progress on the Veronika cardigan. Nearing the cuff on the socks.
Spinning: Finished spinning a skinny single to ply with the slubby singles.
Weaving: A little progress on the rya tote bag. I actually wove a one-inch section without making a mistake!
Needle felting: Finishing touches on the pumpkin from the needle felting workshop, a few more to go and that will be done. Needle felted a little sheep and started an alpaca/llama (not sure yet which it will be.)

Posted by bittenbyknittin at 6:29 PM No comments: Links to this post