My SO and I visited Janesville, WI, last weekend, to attend his family reunion.  As is my habit, I scoped out the possibility of an LYS, and discovered the Dragonfly Yarn Shop.  It did not disappoint, and I made a significant contribution to the local economy.
After I made my selections, the owner graciously offered to wind the yarn.  Oh, no thank you, I responded, I like to wind my own. 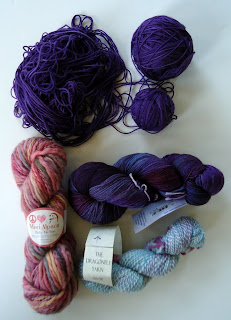 And you can see what a mess I made of that on skein number one.

These infant socks are impossibly tiny and just too cute for words. 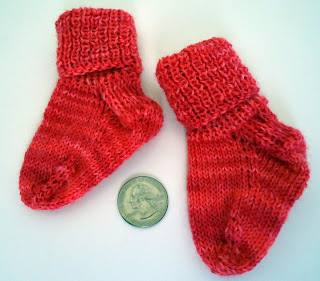 Pattern:  Infant Socks by Judy Ellis (found here)
Yarn:  Schaefer Anne in 'Powder Puff'
Needles:  US1 DPNs
Modifications:  None to speak of, but I didn't realize that the foot consisted of fewer stitches than the leg, and so the gussets don't quite line up with the toes.

These socks used about 15g or 0.55 oz. of yarn, so are great for those bits of leftovers we sock knitters seem to accumulate.  I have just one question, though:  how does one block socks this size?
Posted by bittenbyknittin at 7:24 PM 3 comments: Links to this post 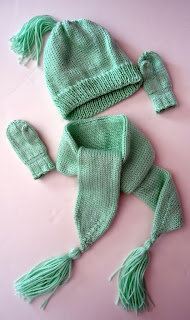 My daughter was enchanted with the anigurumi dolls in a book from the library, so I decided to give them a try. In a fit of rationality, I bought only one skein of yarn to try only one pattern, to see if I even liked crocheting toys. After an hour or two of hand-cramping effort, I gave up, and in frustration, whipped out the ensemble above.

, the mittens from here, and the scarf of my own informal design.  The yarn is Caron Simply Soft in "Soft Green" and I used US7 DPNs.

These items are more toddler-sized than newborn-sized, but I had to knit something while waiting to find out the baby's gender.  Impossibly tiny pink socks coming up soon.
Posted by bittenbyknittin at 9:46 AM No comments: Links to this post

I was going to say, "It's (going to be) a girl!" but it's a fact that will not change with the birth in October.  Anyway, now I know what color yarn to buy for my first grandchild.

Nothing seems to be making it to the FO pile these days.  I was on a business trip last week and took only one project and did not finish it, even though it was a baby HAT.  A reversible baby hat, which is like knitting two hats in one, but still a baby HAT.  You would think I could accomplish at least that much.

Yesterday I took my daughter shopping for some maternity clothes.  The store had a few newborn items as well.  That stuff is TINY!  My kids both weighed over nine pounds, so they never seemed very newbornish.  It is difficult for me to get my mind around just how small babies can be.  It's almost freakish!

Now I have the urge to knit teeny tiny socks.
Posted by bittenbyknittin at 10:47 AM 2 comments: Links to this post