I'm taking a break from BSJs in order to knit up some February baby items, from Elizabeth Zimmermann's Knitter's Almanac

But, assuming the patterns in question are for babies of post-newborn size, like the BSJs, maybe I could go ahead and knit up the Malabrigo on US2 and wind up with a sweater and leggings for a newborn.  So I did just that. 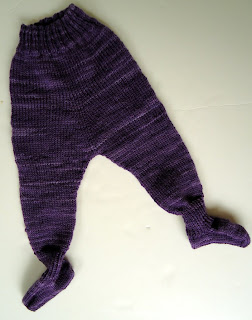 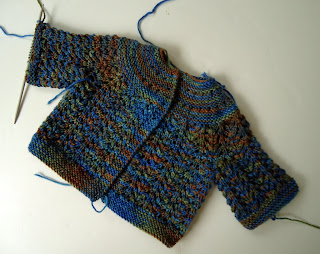 This worked out pretty well, except I ran out of yarn.  Initially, I thought I could just shorten the sleeves, but now I want to find a comparable yarn in a contrasting color for the sleeve cuffs and bottom band and make the sizing "correct".  I was able to determine that two gull pattern repeats equals an inch on this sweater, so I could apply that knowledge to the newborn size. 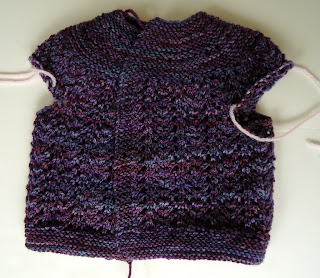 The experiment would not be complete without also making a set out of sport weight.  Toward that end, I purchased the following from Wandering Cat: 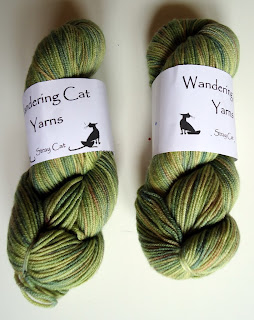 This grandbaby will not be dressed in pinks and pastels alone!
Posted by bittenbyknittin at 1:49 PM 1 comment:

By George, I think she's got it

Does anyone remember the Bog Jacket I was working on?  It stalled where I needed to graft garter-to-garter.  I tried and tried and tried, but it just never looked right.

Then I read on the Techknitting blog that she had written an article for Interweave Knits on grafting, so I purchased the appropriate issue (Spring 2010).  And that is as far as I got.

Now, does anyone remember the purple and pink BSJ I was working on?  That also stalled, at the point where I wanted to add a hood.  The other day I noticed that the A-B-C BSJ pattern I purchased about six months ago included instructions for adding a hood, so I did that.  But then the two halves of the hood needed to be grafted together, garter-to-garter.

So, I bit the bullet and dragged out the Interweave Knits magazine and scanned the article on grafting and, lo and behold, the instructions were so simple even I could understand them. 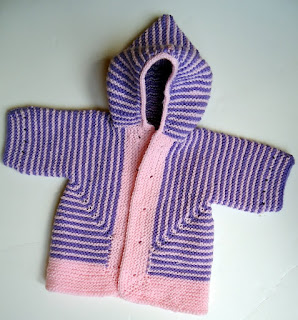 I ran out of yarn, so could not include ties with the attached i-cord finishing on the hood.  And no buttons yet. But at least the knitting is finished. 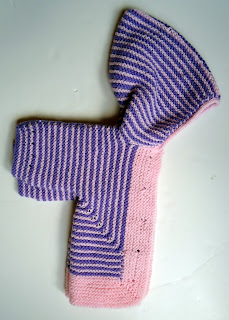 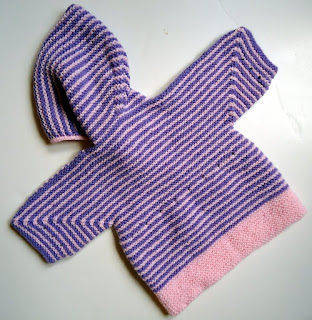 There is quite a pile of BSJs in the gift drawer now, so maybe I will knit something different.  For a while.
Posted by bittenbyknittin at 8:43 PM 2 comments: 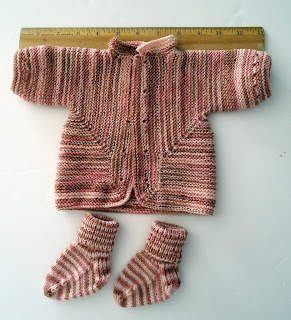 Is that too small?  I have no idea, but I enjoyed knitting it and love the results, even though it still needs buttons.  (I place buttonholes on both sides because 1) I can never remember which side is for boys and which is for girls, and 2) by sewing the buttons over one set of buttonholes, I can be sure buttons and buttonholes will line up.) 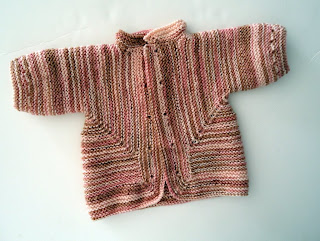 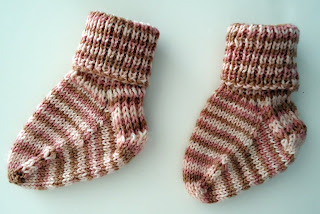 Next, I will knit a BSJ in sport weight, on US4 needles, to further the experiment along.
Posted by bittenbyknittin at 9:39 AM 3 comments:

Three Two hats in one

Who in their right mind would knit a hat flat?  Only someone who is either in love with seaming or afraid to knit in the round.  So while this pattern called for flat, I knit round.  Consequently, I decreased the number of stitches for each sub-hat by two, to eliminate the seam allowance.  But when I was nearly done, I discovered that there was no way the two hats would nest together, as one was too much too big.  So the offending sub-hat was reknit from stitch one, with a decrease of 8 stitches, which just happened to be the correct number for the funky decreasery. 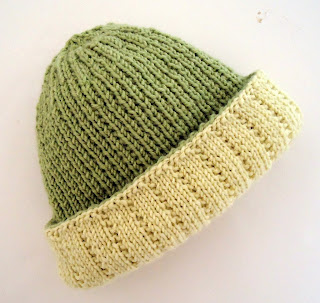 Pattern:  Reversible Hat by Debbie Bliss
Yarn:  Debbie Bliss Baby Cashmerino, in 340041 and 340018 (lemon and sage - thanks, Yarndex!)
Needles:  US3 circs and DPNs
Modifications:  Knit in the round and not flat; decreased "inner/outer" hat by 2 stitches, decrease "outer/inner" hat by 8 stitches (eventually) 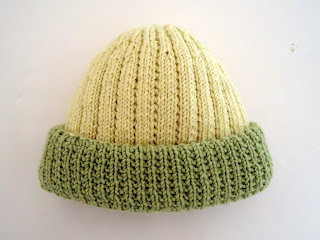 This was my first time with Debbie Bliss anything, and while I think the Baby Cashmerino is overpriced, considering the amount of microfiber in it, I found it attractive and easy to work with.
Posted by bittenbyknittin at 8:39 PM 3 comments: