The bright orange hat was supposed to be a quick and easy project, something I could pick up and work on here and there, an object to give me a sense of knitting accomplishment while also working on the Easy as Pie blanket. But no. Sometimes nothing is ever easy.

The first problem cropped up when, instead of following the pattern instructions, I tried to do my own thing. This hat has a hemmed edge, and the directions suggest starting out with a smaller needle for the section that gets folded under. I did not see that suggestion (because it came late in the pattern, not at the beginning), so instead I cast on four extra stitches after the "fold" row, then later decreased by four stitches to align with the rest of the instructions. This resulted in a ridge, a ridge I told myself did not matter, it was just a HAT. 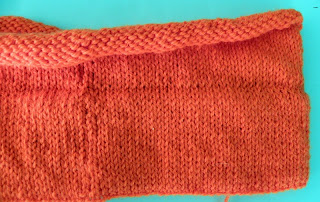 Of course, by the time I neared the crown, that ridge was eating away at me. It glared at me, it yelled at me, it told me I could do better. So, despite being nearly done, I started over. And instead of redoing the hat on DPNs (stitches kept falling off the ends) or a 16-inch circ (which has a short needle length that is a challenge for my man hands), I decided to use two circs, just as I have used on some toe-up socks.

So away I went, fat, dumb, and happy, for about an inch, then tried to admire my work by unrolling the stockinette. That's when I realized there was a twist in the stitches. In disbelief, I kept trying to flatten the stockinette, thinking surely, *surely* I had not made that newbie error. But alas, it was true. 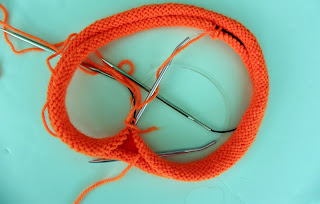 So the hat is in a time out. Me, too. Gonna move on, at least for a while.
Posted by bittenbyknittin at 12:57 PM

Email ThisBlogThis!Share to TwitterShare to FacebookShare to Pinterest
Labels: hat