Dye with tomato vines? Had to try it

One advantage of having several sources of information on fiber arts is exposure to a variety of techniques. I picked up a copy of Vegetable Dyeing, by Alma Lesch (out of print) because it includes a recipe for dyeing with tomato vines. While I didn't follow her methods, preferring the ones described in Wild Color, I had to give tomato vines a try.

With no tomatoes in my garden this year, I obtained some from my neighbor once he was done with catsup-making; we are still waiting on a killing frost, so the vines were still green. All five 1-ounce skeins were treated with alum and cream of tartar as a mordant. Then I tried four different afterbath modifiers, from none to iron. In the photo above, the leftmost skein is Lambs Pride and received no modifier. The other skeins are Cascade 220 and, in order from left to right, received no modifier, vinegar, ammonia, and iron. The differences are modest, to say the least. 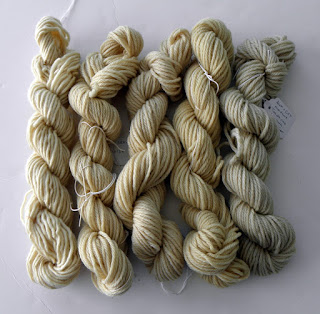 The author of Wild Color makes it sound like one needs only a few teaspoons of vinegar or ammonia to create an afterbath, but next time I am going to up that to at least a quarter cup, as recommended elsewhere, as so far they haven't really affected the color. I'm also going to test with litmus strips, to make sure the afterbaths are truly different in pH. 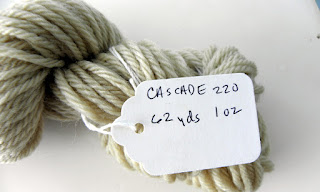 To create my mini skeins, I wind yarn onto a niddy noddy, counting the number of rounds to come up with the yardage. Then I weigh to result. One side of the label contains this information. 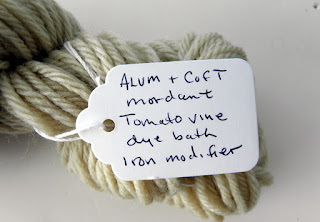 The other side of the label holds the dye information. I am getting better at making AND attaching labels to my fiber products. The story behind the yarn used to knit or weave something is as important to me as the end product itself.
Posted by bittenbyknittin at 11:47 AM