While looking forward to days of frigid temps, I decided it was a good time to dye. There were several choices available from my dye stash, but I chose dyers coreopsis (coreopsis tinctoria). Per usual, it was an experiment.

Working from Jenny Dean's Wild Color, this time I tried extracting dye from the flowers by pouring boiling water over them and letting them steep, instead of simmering the blossoms. A true experimenter would try it both ways, but I had only 200g of flowers to work with. Then I mixed and matched mordants and modifiers. 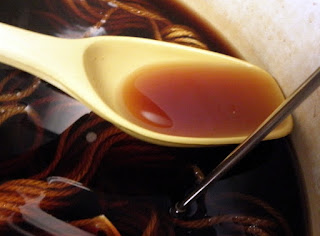 One thing that never ceases to amaze me is how the dye bath can look one color, but the yarn turn out another. And then the yarn samples differ depending on the mordants used. Post-dyeing modifiers create even more shades of color. 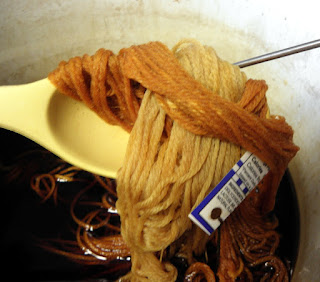 I don't know what I did wrong, but some of the yarn skeins developed dark patches. This occurred during the post-dye application of an alkali modifier. But I still wound up with a nice assortment of colors and shades of colors. 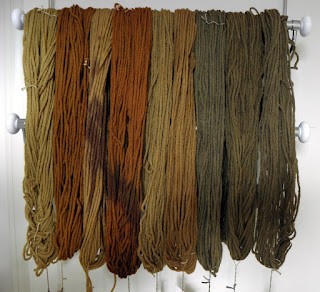 From left, in pics above and below: 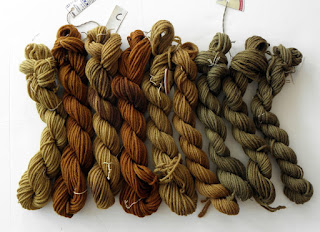 Below: no mordant; from left, no modifier, alkali modifier, iron in dye bath. 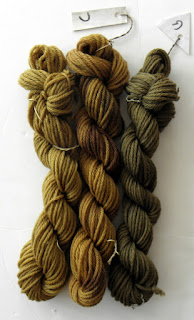 Below: alum mordant; from left, no modifier, alkali modifier, iron in dye bath. 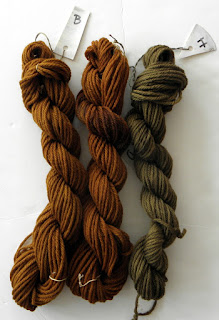 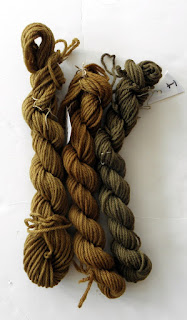 Below: from left, no mordant, alum mordant, rhubarb leaf mordant; no modifier. 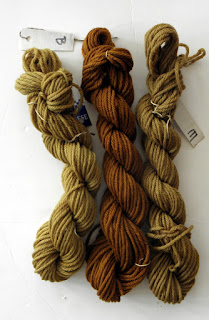 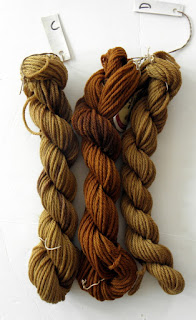 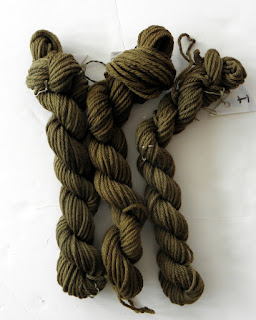 How do I keep track of what is what? I create a "cheat sheet". Each skein is assigned a letter, written in Sharpie on a piece of plastic that is attached to the skein all through the process. The information is transferred to each skein's info tag, which contains fiber information on one side (in this case, Cascade 220, plus length and weight) and dye information on the other. 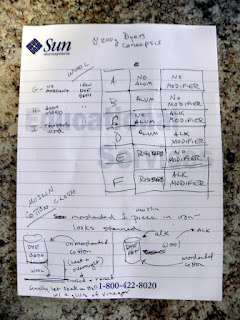 Another question you might have is why I added iron to the dye bath. That was half experiment, half accident. The experiment part arose from the fact that some natural dyes look different on vegetable fibers like cotton than they do on protein fibers like wool or silk. So I purchased some yardage of muslin ("natural" - unbleached - on the right, below) from Dharma Trading Co. However, I wasn't sure how to handle it. So I threw a yard into the dye bath, which produced a light tan (middle sample, below). Another yard was pretreated with an iron mordant. I neglected to rinse the iron out of the material before putting it into the dye bath, which resulted in "saddening" the dye color; that produced an olive green (left sample, below). I also discovered that rinsing muslin is much different from rinsing wool yarn. So much color came out of the unmordanted sample that I treated it to a vinegar bath in an attempt to set the color, but that didn't seem to make much of a difference. I should do more research before continuing with the cotton muslin aspect of my dye experiments. 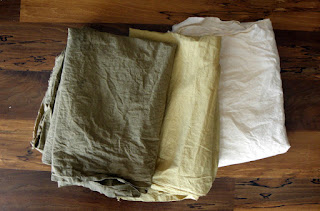 Since the dye bath had been contaminated with iron, I decided to throw in a few more skeins of yarn. All in all, this dye experiment took three days, plus a day for clean up. A tiring but satisfying way to spend the polar vortex. What did you do?
Posted by bittenbyknittin at 12:58 PM