Sometimes I come back from a fiber festival with some luscious roving that is not labeled. If I'm lucky, there is a written receipt that describes what I purchased. Frequently, though, I just tell myself, I'll remember what this roving is. HA!

So today, having recently made a major purchase in roving from the under-new-ownership Little Shop of Spinning, I did a little housekeeping and tagged each ball of roving with the facts: breed and colorway. Well, some got facts on their tags. A few balls I purchased during the grand opening were not tagged, nor did the receipt specify what I had purchased, just what I paid. Those were labeled with guesses. 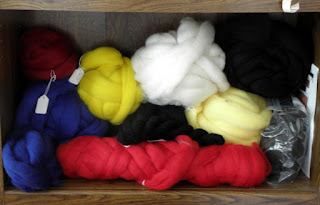 What, you may ask, do I plan to do with all those primary colors? Well, mix them, of course. Last year, at Ply Away, I took a class in what was supposed to be fiber prep but turned out to be an exercise in blending. That got me started down the path of why-look-for-the-perfect-color-of-roving-when-I-can-blend-my-own.

Back to those famous last words I'll remember. Before I learned to spin on a wheel, I made a genuine effort to spindle. Eventually, those spindles became part of my decor. I decided to try selling the spindles, but first had to remove the long-forgotten-where-it-came-from fiber from the spindles. And while I was at it, I decided to finish spinning the Shetland and ply it all off the bobbins (before I forget what is there). 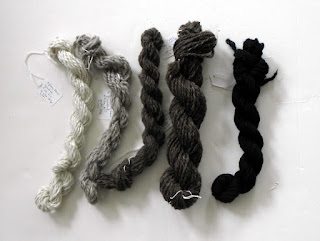 Meanwhile, I am experimenting with gradient yarns for tapestry. One book I work from suggested taking the 3-ply commercial yarn one is working with and divide the plies, then combine them with other nearby colors of singles. Well, the commercial yarn I happened to be using at the time does not take kindly to being unplied and replied. Then I realized that I can create my own mixed color plies.

I have been spinning up white, three shades of gray, and black into singles, with a plan on combining the singles into a series of gradients. For the record, the white and black are Corriedale, the light and medium grays are Romney/Wesleydale, and the dark gray Wesleydale.

While looking up the links for this post, I found some photos that indicate the spindled yarn may be what came in the spindle kit from Louet. Some of that turned into a cowl that I used A LOT during the polar vortex. And I also see that the rose gray alpaca I thought I bought in Ohio actually found me here in the Fort during the Johnny Appleseed Festival. Maybe I should read my own blog to find out what's what in my stash.
Posted by bittenbyknittin at 3:50 PM