I am embarrassed over how long it has taken me to officially finish the February Lady Sweater. I swatched in January, knit off and on until July when I blocked it, then it sat until now, waiting for three little buttons to be sewn on. 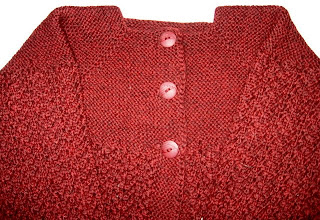 So much for the embarrassment. Now for the disappointment. The sweater looks like crap on me. My efforts to make the neck smaller did not help because my shoulders are just too broad for this style. My daughter tried it on, and while it looked better on her, she said it felt like an "armpit wedgie" because there was too much material under the arms for her taste. 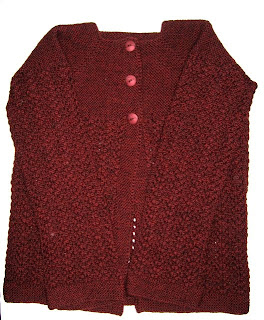 But it's so cute! And I loved knitting it in spite of the splicey yarn! I guess it will take up residence in the gift drawer, waiting for its true owner to show up.
Posted by bittenbyknittin at 8:38 PM

Hello! I am Inés from Abuelita Yarns Company. Do not feel bad! Life is about trial end error and we have to learn to improve in what we do! :)
We are a uruguaian brand which sells yarns. If you want to know more about us please enter www.abuelitayarns.com or if you wish to see our articles and pictures enter www.abuelitayarns.com/blog/
Good luck! :D