Oh, I give up, sorta

So far, I have not become a fan of knitting socks on two circular needles.  Since I like to knit both socks at the same time, I originally tried to knit two-at-a-time on circs but it was a big FAIL.  Then I decided to try one sock at a time, and that is better, but I am not convinced circs beat DPNs.  The problem is, using one 24" and one 16" works as long as I am knitting stockinette on the 16" set.  Once I get past the heel and need to knit the fancy shmancy lace pattern on the 16" ones, my freakishly large fingers cramp up.  I know I could use two 24" needles, but I don't have two 24" needles in size US1.  But I may have one 32" set, so maybe I will try knitting on one circular needle.  Next time.  Meanwhile, I am finished the legs with DPNs. 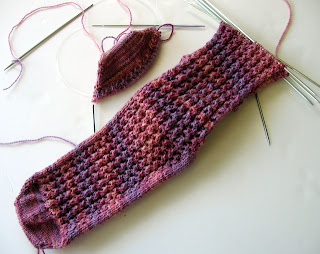 And I am not becoming a fan knitting socks toe-up, either.  Knitting top-down, one starts with the hard stuff, and once past the heel, one is in the homestretch.  Or so it seems to me.  Toe-up, on the other hand, starts with the easy stuff, then gets progressively more difficult.  In general.  Not that the socks are all that difficult to knit.  It's more of a psychological thing.  But I do favor toe-up when in doubt over whether there is sufficient yarn.  The legs of socks can always be shorter, but not the feet.

Meanwhile, I actually finished something:  the mistake rib scarf. 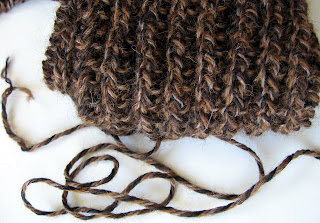 Pattern:  Mistake Rib Scarf, from Wendy Knits.
Yarn:  Classic Elite Inca Marl, in "Tobacco Road" colorway
Needles:  US7 straights
Modifications:  I cast on 31 stitches instead of 19, and the scarf is as long as my wingspan is wide.

The above photo is an attempt to showcase the yarn, but my camera just doesn't do it justice.  This scarf will look great with my brown faux shearling coat, but neither will be worn for many a month.

To get into the grandma knitting mood, I ordered a boxful of Valley Yarns Valley Superwash DK, one skein in each color available at Webs.  First up, baby booties: 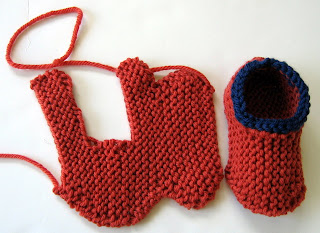 I think baby booties are quick but difficult.  And these are falling into the classification of "practice" booties, as I'm not thrilled with the decreases (the pattern, from 50 Baby Booties to Knit, is not very specific).  Sometime between now and October, I will get the hang of knitting booties.

In other news, the toilet tank runner grows, albeit slowly: 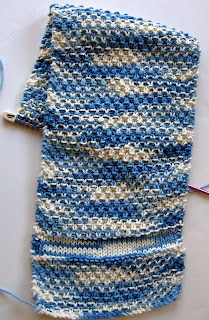 Lately, between working and gardening, I have been too busy to keep up on blog reading, let alone blog commenting.  And other things are falling by the wayside, like spinning and dyeing.  And sometimes blog writing, although I justify blogging by reminding myself that this is the best way to keep a log of my knitting projects.  I am so looking forward to retiring, someday, hopefully while I can still do the things I want to do.
Posted by bittenbyknittin at 7:45 PM

Hi Abby! I bet you are so excited to be a grandmother! I love babies! Hubby's cousin is going top hoave a baby and well I want to make about a 100 different things for the babe. I will behave though because she is in the military and will be moving around with her hubby.

About socks I think you should try a 40" for Magic Loop. My fingers have problems with cramping and I found 40' is much more comfy and less crampy.

Oh and one of my favorite bootie patterns is Christine's stay on baby booties. From what the mom's have told me they really do stay on. I wish i knew about them when my babies were babies = )

Those booties are really cute. Last time I tried to tackle a pair of those I got so frustrated I frogged the whole thing.

I, in my backwards way, managed to teach myself magic loop and I like it better than two circs. I avoid dpns like the plague.

I don't like two circs, either. However, once they're started (on dpns) I love using the magic loop method with one circ. I'm much less likely to pull out the wrong needle. I do the first few rows in dpns, then switch to a long (32" - 40") circ. It gets a little tricky when doing the heel gusset, but in the long run, much MUCH more efficient for me.

Oh, and congrats on the grandbaby! I have two, and they're wonderful! You can send them home! And keep them when you want. It's terrific! Enjoy.