The body of the February Little Lady sweater is complete, so all that is left are two short sleeves and buttons. I've been complaining on Ravelry about my struggles with the math of the pattern, with one correction by the author so far. But I am still bugged by the stitch counts I ended up with at the end of the yoke. A few others have knit this pattern without complaint, so I fear the fault is with me. Despite drawing pictures, I just can't see where I went wrong; a spreadsheet is next. I'm also worried about my yarn choice, as the denim will shrink lengthwise; what will that do to the gull stitch? 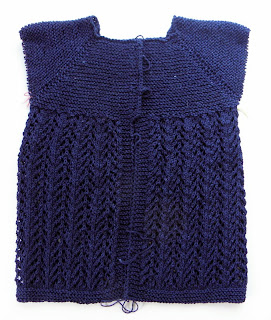 The hunter orange hat is more than halfway done. I decided to do a hemmed version and wish I had read the part of the pattern (at the END) that suggests using a smaller needle for the inside part of the hemmed section before I had knit three inches of the thing. Instead, I increased the stitch count by four stitches after the turning row, then decreased three inches later when joining the two sections of the hem. The hat won't look perfect, but wabi sabi.
Posted by bittenbyknittin at 9:59 AM