This is the start of the first one, which I knit 'way too tight. (Frequently, when I knit something for the first time, I tense up and knit tightly.) Since the pattern is a nice 2x2 rib, armwarmer #1 stretched enough for a nice fit, but after wearing it a while, my fingers grew numb. 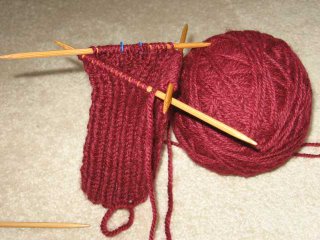 Armwarmer #2 knit up just right, so I frogged armwarmer #1 and knit up armwarmer #3. Done, right? Wrong. See how the tops bell out? They were much too loose, and they would probably stretch with use, so I kept trying different bindoffs to tighten them up. I eventually settled on purling the bindoff stitches. 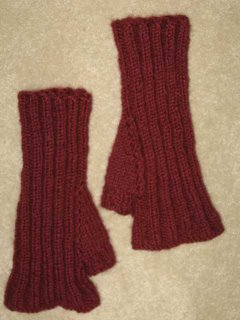 As much as Nate loved the armwarmers, he left them behind xmas day. I tried them on one more time before mailing, and decided the tops were still too loose. What to do? I decided to rip back an inch or so on each one, and reknit, using smaller needles. Thankfully, this worked well. 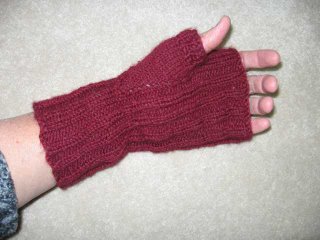 BTW, I knit these in Plymouth Encore worsted, using this pattern from Gaea Creations. Besides the above problems, I struggled with the "make one" stitches, never quite getting them right, hence the eyelets along the thumb gusset. I have since learned how, from Knitting Help.
Posted by bittenbyknittin at 3:02 PM