Maybe it's because I am a Libra, but I tend to be very rule conscious, which gets me into trouble when knitting. I want to follow the directions exactly and produce exactly what the picture shows.

Well, knitting (and life in general) does not work that way. So, when I found myself starting and restarting what has to be the simplest pattern ever, I had to ask myself, What is your problem?!?

The pattern, from Mason Dixon Knitting, is for a baby bib. It is all garter stitch. The pattern says cast on this many stitches and knit this many rows, then do this and do that to create the straps.

First deviation: I thought the book said "Sugar and Cream" cotton yarn, but it said "Peaches and Cream". I like to try new yarns, so often try to find exactly (that word again!) the same one used in the pattern. I have never used Sugar and Cream, though, so I guess my personal rule is unbroken.

Second deviation: When I cast on the number of stitches, even on a needle one size smaller, I ended up with something that was destined to be 11 inches wide instead of 6.5. Since I find cotton yarn difficult to knit, due to its inelasticity, I decided I would just cast on fewer stitches, like 30 instead of 40.

Third deviation: Throwing caution to the wind, I made the wild and crazy decision not to count rows, but just knit until the piece looked squarish.

Fourth deviation: I'm on a roll now. I made the straps only 7 stitches wide instead of 10. And instead of measuring them, I made them the same length as the bib portion. And I put in three buttonholes, to make it adjustable. And I used a different method to make the buttonholes (the pattern said I could, so I guess this is not really a deviation). 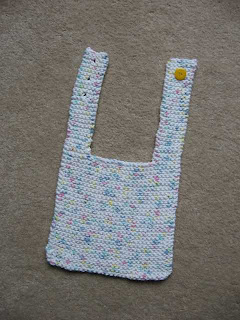 Tada! But I'm not going to use that yellow button - it's too yellow.

And I completed Magic Stripes sock #1. It is a bit snug, but after blocking should be just right. 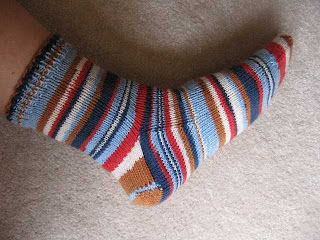 Posted by bittenbyknittin at 6:38 PM

hello from a fellow libra :)
Thanks for cruising by my blog - your sock looks wonderful :D

oh, and as a previous flat lander myself, I am always amazed at the diverse scenery I encounter these days!