I'm calling this one DONE

My SO doesn't usually ask for a specific handknit, but he saw this Fibonacci sweater-vest in Knit One Below and fell in love. The pattern called for detachable sleeves, but I knit it as a vest so as not to bring the curse of the boy friend sweater down upon our heads. 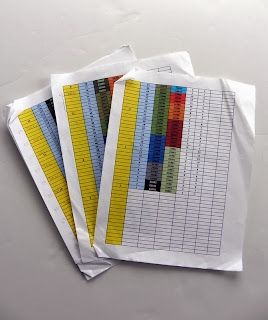 Knitting one below is not difficult, just tedious, as each row is basically knit twice. The result is a double knit fabric that is quite toasty despite its light weight. This vest was knit all of a piece - no seams except the special 3-needle bind off at the shoulders. 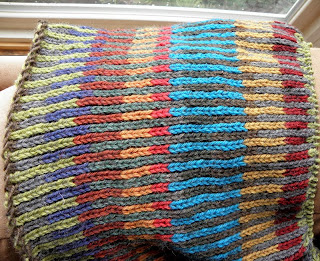 The toughest part was knitting the edging, as I could have used a much longer circular needle. 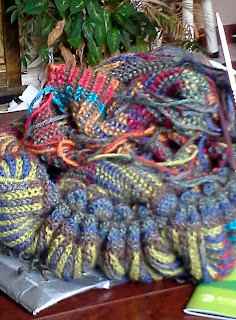 Either I did not understand the instructions for picking up stitches or the instructions were just plain wrong, as I knit the edging at least twice, if not three times before it was wearable. The only other major snafu I encountered was due to my inability to count: one front side was a row or two longer than the other, which I didn't discover until after seaming the shoulders. I'm glad I made the effort to correct it. 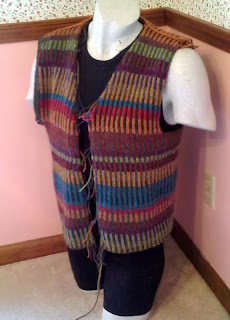 I started this project March, 2013, and just yesterday stitched up the armpits and wove in the last of the ends. What took me so long? Just me. My knitting MO is to knit and knit and knit some more, until I hit a snag (in this case, first the edging, then the armpits) and then the poor thing sits abandoned until I put on my big girl pants and finish it. 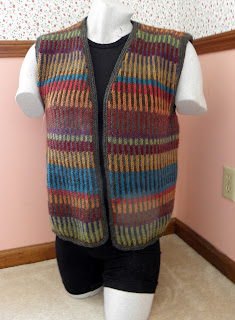 Ordinarily, I don't consider a project done until it is blocked, but this one has sat on Mr. Manly so long that I am turning it over to my SO while winter still holds us in its icy grip. It also needs buttons, which will require some searching. In the meantime, I am considering this project FINISHED.
Posted by bittenbyknittin at 9:31 AM

Email ThisBlogThis!Share to TwitterShare to FacebookShare to Pinterest
Labels: Fibonacci, Knit One Below, Knit Picks, vest, Wool of the Andes

Oh, it's marvelous!!!! I'm impressed that you got it done in just a year, to be honest. I learned double-knitting on what was going to be a potholder, but finally decided I could accept that I understood the concept without ever finishing the dratted thing.

Your SO must be thrilled with it. It's wonderful.