Last March I deemed the Fibonacci Vest as complete, even though it lacked buttons. Not that we didn't search for buttons, but finding the perfect buttons proved elusive. Then summer came and meh, who cares about buttons on wool vests? With winter pressing down upon us, though, buttons once again seemed imperative. And we found some at Joann that satisfied that need. 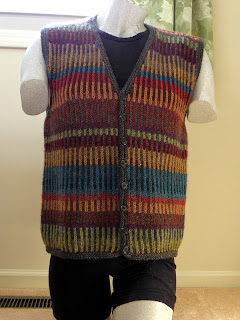 Meanwhile, I *still* have not completed Tuckernuck. I got stuck on the set-in sleeves, then on the button band, and now on the button hole band. Plus a severe case of startitis hit (coinciding with the creeping crud - two weeks of misery) which led to some WIPs: a scarf, a pair of socks, and a hat, all requiring next to no brain power. I'm finally feeling better, so it's time to tuck Tuckernuck into bed.
Posted by bittenbyknittin at 11:43 AM