There ought to be a law

I had so much fun yesterday that you would think fiber fests should be declared illegal and all roving confiscated as a controlled substance. I arrived at the Jay County Fairgrounds in time to see a sheep shearing and border collie demonstration. The rest of the morning was spent shopping and the afternoon spindling.

The Fiber Fest and Spin-In was smallish by most standards, and mostly devoted to spinning. Consequently, there were wheels, roving, spindles, more roving, fleeces, more roving, some yarn, and, if you can believe it, more roving. I have roving at home, but that did not stop me from buying more. 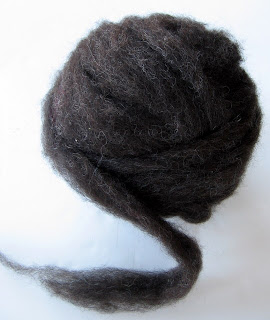 This is Audrey and Duncan with a little alpaca thrown in. The vendor refers to her roving by the names of the sheep, which never failed to get a giggle out of me. Her sheep were originally purchased by her husband who viewed them as organic lawn mowers. She countered his sheep purchase with an Ashford wheel she found on eBay. And now, here they are, spinning and selling roving at a fiber fest.

I have been to enough fiber fests in Ohio and Indiana that I come to expect certain vendors to be present, and Weaver's Loft did not disappoint. Weaving is becoming the new knitting, and I was tempted by their tabletop looms, but opted for this alpaca instead. 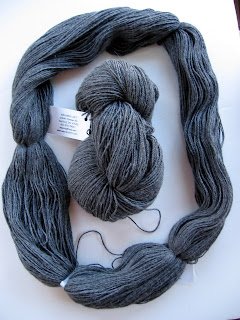 A pound of "Mist Gray" that is destined to become a Faroese shawl.

But yesterday's woolly high was due less to fiber and more from the class in spindling. I had previously attempted to teach myself, with ugly results. Three hours of instruction was just what I needed, to get back in that saddle. The instructor was great, very knowledgeable about not only spinning, but sheep, wool, yarn, etc. There was not a question she could not answer.

My classmates were an interesting group as well. There were six of us in all. One woman stitches with yarn; she creates her own singles by splitting two-ply sport weight yarn, but thought it would be fun to spin her own singles. Another woman's specialty is filet crochet, something I have attempted but not to any great degree. A third woman does not knit or crochet but wanted to learn spindling in order to do it at reenactments; the instructor had specific suggestions for her about that.

The instructor supplied us with a variety of roving to work with, mostly from her own flock, and by the end of the three hours, I was spindling better than ever. That isn't saying much but I was quite pleased with the results. 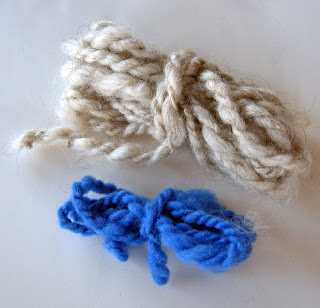 And I drove right home and continued spindling into the night. 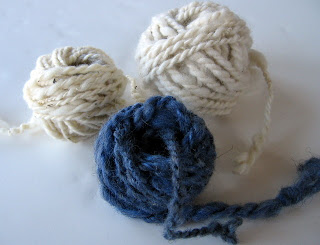 And this morning my shoulders and hands are causing me some pain, but it's a good pain.

And my funk seems to have lifted. Thank you, Fiber Fest, I needed that!
Posted by bittenbyknittin at 9:09 AM