Here is the final pic of the blocked Willow Cowl. 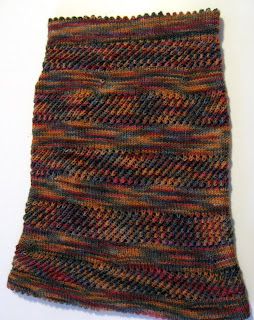 I still like the colors, but I also still think that is a lot of cowl for my neck.  I have not actually worn it yet.
This pic of the Any Way Wrap is four pattern repeats, I think.  Only 12 more to go! 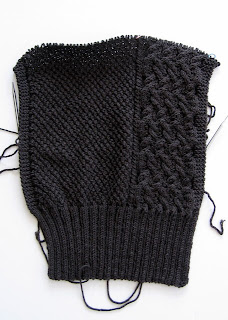 I like Karabella Aurora 8, but it is very stretchy.  I'm thinking maybe it is not the best choice for cables, but I will reserve judgment until after the whole piece is blocked.
The Diagonal Cross-Rib socks feel like they are taking f-o-r-e-v-e-r, partly because I have been knitting DK socks lately and partly because the legs are 8 inches long. 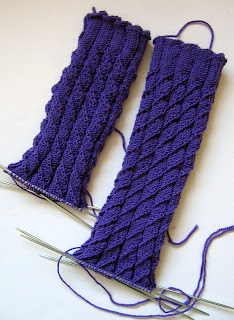 Since I took this picture, I have finished the legs and moved onto the heel flaps.  After knitting one heel flap slipping stitches purlwise, I reread the instructions and discovered I was supposed to slip the stitches knitwise.  After a short internal debate, I started knitting the second heel flap knitwise, to see what the difference would be, and only later did I actually look up the errata for Favorite Socks.  There are quite a few corrected patterns, but not this one, so I guess slipping stitches knitwise is the intent.  I think it goes with the twisted rib better than the purlwise ones, but I'm not sure, which has caused me to stall.  Just pick one and go with it, lady!  It's only knitting!
An aside on the errata:  When I knit the Go with the Flow socks from this book, I complained about the gusset not looking right.  Well, guess what - it wasn't ME, it was the pattern that was wrong.  HA!  I feel vindicated!  Petty, but vindicated.
Posted by bittenbyknittin at 7:07 PM

gorgeous colours in the cowl!